East 91st Street Crane Was Struck by Lightning in 2007 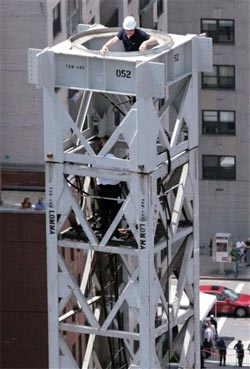 As the Department of Buildings, Manhattan DA's office, and OSHA investigate the fatal May 30 crane collapse at East 91st Street and First Avenue, the crane's history continues to be a focus.

Immediately after the collapse, it was suggested and later confirmed the crane was the same one that had been damaged at a West 46th Street construction site in 2007. The NY Times looks at the crane's "second life," reporting that the crane's turntable was damaged by a bolt of lightning in spring of 2007: "Over the weeks that followed, the turntable’s bearings began to grind, and the stress apparently caused a crack in the surrounding steel that grew so wide that a worker noticed daylight glinting through it, according to an engineering report for the crane’s owner."

The turntable was removed, but how the apparently rebuilt turntable reappeared on East 91st Street remains a question, as is how can the DOB monitor cranes when there is high turnover in the cranes unit and crane inspectors are generally underpaid. While many think third-party inspectors might help with crane monitoring overall, it's unclear if the East 91st crane collapse could have been prevented, since the repaired turntable apparently passed its insurer's inspections.

In the wake of the collapse, the top cranes official James Delayo was arrested on Friday for allegedly accepting bribes related to Class C--small, mobile cranes (not the larger cranes involved in the fatal collapses)--licenses. He would reportedly visit construction workers, ask them into his car, and show them the crane operator's exam in advance of their taking the test.

Governor Paterson said of the arrest, "Certainly, there is going to have to be a total investigation of the process and the licenses that were granted." But he expressed confidence that "Mayor Bloomberg will get this under control." But the arrest and vow of reform are too late for families of construction workers who died in March's crane collapse; one father said, "Saying it ain't going bring my son back."