The Earth had its hottest year on record in 2016, following previous records set first in 2014 and then in 2015. Previously, 2010 and 2005 were the hottest years on record, and the ten hottest years in recorded history have all occurred in the last decade. It almost seems like a pattern, but that's just what China wants us to think.

The National Oceanic and Atmospheric Administration says last year's average surface temperatures ticked up 0.07 degrees higher than in 2015, and that each month from January through August 2016 was individually the warmest recorded. 2016 was also the second warmest year on record in the United States, which suffered a number of weather disasters brought on or exacerbated by global warming: 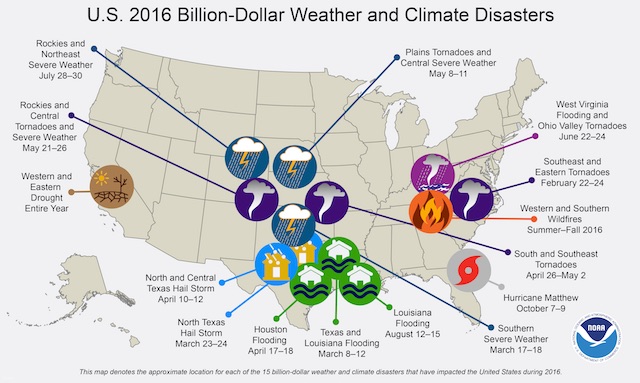 NASA also concluded that 2016 was the warmest year on record, although they found 2016 was an average of .22 degrees Fahrenheit warmer than 2015, which differs slightly from NOAA's average.

Scientists say the obvious emerging pattern is alarming. "A single warm year is something of a curiosity,” Deke Arndt, chief of global climate monitoring for NOAA, told the Times. "It’s really the trend, and the fact that we’re punching at the ceiling every year now, that is the real indicator that we’re undergoing big changes."

Indeed, Trump's administration has threatened to gut NASA's climate change research in favor of deep space exploration, declaring it "politicized science." Perhaps next year's temperatures won't be the warmest recorded on Earth, because they won't be recorded at all.

#climate change
#global warming
#nasa
#noaa
Do you know the scoop? Comment below or Send us a Tip