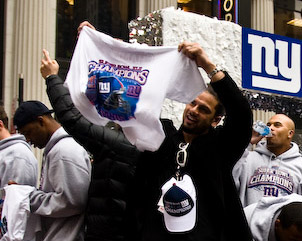 For the Giants, the opening of free agency saw them lose three players. Kawika Mitchell went to the Bills, Reggie Torbor to the Dolphins and Gibril Wilson to the Raiders. The loss of Wilson will hurt the most, but remember he was once a fifth-round pick. GM Jerry Reese proved last year that he is very good drafting players and won’t overpay in the free agent market, so don’t panic the Super Bowl champs will be just fine.

The Jets jumped into the free agency market from the start, giving their team an immediate makeover. Out goes Jonathan Vilma to the Saints for a conditional draft pick. In comes Kris Jenkins from the Panthers for third and fifth-round draft picks. Jenkins also gets a new five-year deal with about $20 million guaranteed. Jenkins will come in and take over the nose tackle spot which may mean the end of Dewayne Robinson in a Jets uniform. Finally, the Jets signed Alan Faneca, a guard from Pittsburgh. Faneca, a ten-year vet, is considered one of the best guards in the game and should provide the perfect anchor on the line between Mangold and Ferguson.

In other sports news St. John's has decided to bring Norm Roberts back next year and will meet with him after the season to discuss an extension. Roberts' tenure at SJU has been unsuccessful on the court, but he has had to rebuild the program almost from scratch thanks to Mike Jarvis. With all the basketball talent in the city, St. John's should be able to rise again, now Norm will have an opportunity to finish what he started.

Lastly, Mets' fans can catch their team in action today at 1pm on Channel 11. (And Yankees' fans you can see your former manager in a strange uniform.)