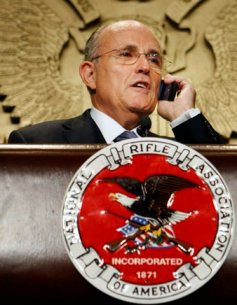 Rudy'n'Judi, may your antics never ever end! The former mayor was speaking to the National Rifle Association today when he interrupted his speech to take a call from the wife. Seriously. The NY Times has video and coverage - it doesn't seem like he silenced his phone fo the speech! That's how much he respects the NRA members!

When Giuliani reaches into his pocket for the phone, he says it's probably his wife. He answers the phone and says, "Hello dear. I’m talking to the members of the N.R.A. right now. Would you like to say hello? I’ll give you a call as soon as I’m finished. Have a safe trip. Bye bye.”

Man, they should learn about text messaging. Or not: The NY Times points to this Youtube video of Giuliani answering Judi's call during a June speech. The NRA audience did clap (applauding family values?), but apparently many members aren't sure what to make of Giuliani, who did, you know, sue them when he was mayor of New York.

Here's another Giuliani moment: When he was in London earlier this week, Giuliani said, "I'm probably one of the four or five best known Americans in the world."