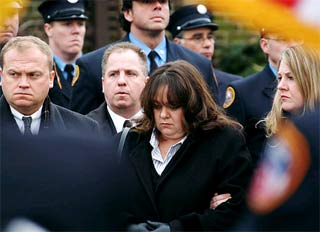 Fire Marshal Douglas Mercereau was laid to rest at St. Charles R.C. Church on Staten Island yesterday. Mercereau was found murdered in his home, shot three times in the head, and his wife appears to be a suspect. Though the police have not officially named any suspects, Janet Redmond-Mercereau allegedly had a rocky relationship with her husband, to the point where the two started divorce proceedings in 2006. At the funeral, mourners "cast suspicious glances" at the "dry-eyed and stonefaced" widow.

Some suspect that Redmond-Mercereau, a public school teacher, was driven to kill her husband because he would humiliate her about her weight. Early Friday morning, investigators reenacted the shooting in the couple's home; Redmond-Mercereau claimed not to hear the shooting (she says she took painkillers before sleeping), which took place around 6:30AM. After firing three rounds "into a reinforced container" and observing how the sound traveled, a police source told the Daily News, "She said she didn't hear the shots? You would have to be dead not to hear the shots if you were inside the house." In fact, reporters 100 feet outside the home could hear the gunfire.

Investigators are also awaiting DNA results: When police responded to the Mercereau home on Sunday morning, Redmond-Mercereau had blood under her fingernails, she claimed it was menstrual blood. And her financial records are being probed, as police consider a murder-for-hire scenario.

Some typical FDNY funeral rituals were bypassed because of suspicions that Mercereau was killed by his wife. Usually the widow is presented with the firefighter's hat, but an FDNY source said, "For reasons of political correctness, we're going to keep the helmet in the church. It's bad enough to have a funeral, we don't want to stir anything up between the two families."