During Debate, GOP Candidates Zero In On Hillary 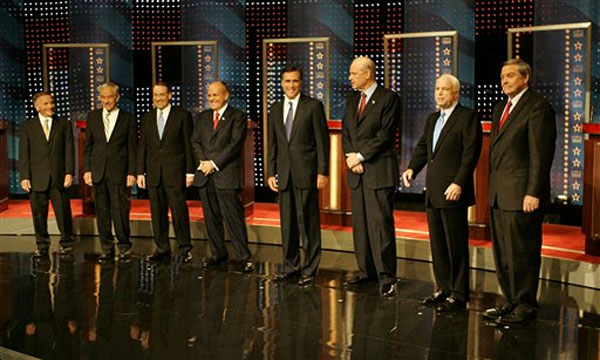 While they certainly spent time criticizing each other, the Republican presidential hopefuls devoted much time to criticize the Democratic frontrunner Senator Hillary Clinton. Former Massachusetts governor Mitt Romney said, "she hasn't run a corner store. She hasn't run a state. She hasn't run a city. She has never run anything. And the idea that she could learn to be President, you know, as an internship just doesn't make any sense." And Senator John McCain got a big round of applause for blasting Clinton and Senator Chuck Schumer's $1 million funding of a Woodstock memorial:

"Now, my friends, I wasn't there. I'm sure it was a cultural and pharmaceutical event. (LAUGHTER) I was tied up at the time."

As for the barbs amongst each other, former senator Fred Thompson continued to poke holes in Giuliani's conservative stances, "Mayor Giuliani believes in federal funding for abortion. He believes in sanctuary cities. He’s for gun control. He supported Mario Cuomo, a liberal Democrat, against a Republican who was running for governor, then opposed the governor’s tax cuts when he was there.”

Oh, the simple fact is that New York City had a policy of allowing people who are illegal immigrants to report crime and to put their children in school. Otherwise, we reported every single illegal immigrant that committed a crime. The results had to be pretty darn good. I brought down crime by over 60 percent in New York City. I brought down homicide by 67 percent. I had the most legal city in the country. And I took the crime capital of America and I turned it into the safest large city in the country.

The senator has never had executive responsibility. He's never had the weight of people's safety and security on his shoulders.

I have. And I think I out-performed any expectations

You can read the transcript of the debate here.