Dunned If By Land, Screwed If By Sea 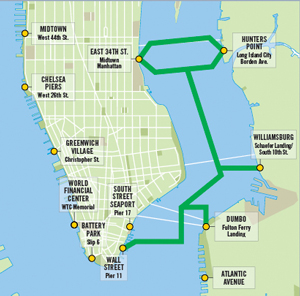 New Yorkers still trying to swallow the fare hike that's been approved by the MTA board can at least take heart that entire swaths of services aren't being eliminated. New York Water Taxi commuters are facing the elimination of large parts of that company's East River service from the beginning of 2008 at least until May of next year.

New York Water Taxi regretfully announces the suspension of commuter service on the East River from 1/1/08 to 5/1/08. As you may know, NYWT took over the service in 2003, on short notice, when it was abandoned by another operator. We have added new stops and worked tirelessly to make the run economically viable.

The company is citing a doubling in fuel prices since last year and a drop in ridership that just makes winter and early-spring operations economically nonviable. We have to imagine this is upsetting to residents and developers of spots like the Schaeffer Landing complex, that was touting its new Water Taxi stop right outside its buildings as an antidote to its relative remoteness from any subway stops. At least new residents of Dumbo can still get to the F train comparatively easily.