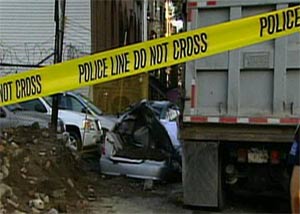 Yesterday morning, a dump truck and Toyota Camry going west on Atlantic Avenue had a deadly accident. The truck, which was filled with debris, jackknifed and overturned, crushing the Camry and its two passengers.

Police suspect the Camry may have attempted to cut off the truck. The accident occurred at Atlantic Avenue near Washington Avenue, and a resident complained to the Post, "This intersection is insane. It's like they get the devil inside of them as they approach this intersection.

The Department of Sanitation brought over three bulldozers to help upright the truck. One resident told Newsday, "First, you heard a huge screech, then a 'boom, boom, boom' and another boom. It sounded as if it would never end. I didn't even see the car underneath the dump truck. That's how bad it was."

The truck driver was treated for fainting. He was not charged with any crime, but the police are still investigating.