DUMBO: Watch Out For This Alleged "Hipster" Upskirt iPhone Perv

The NYPD has released this surveillance photo of a man wanted for "USING HIS CELL PHONE TO FILM UNDERNEATH THE VICTIM'S SKIRT" in Brooklyn's York Street F station—attractive to upskirt fiends for its very long ramp and steep staircases. Last month, you may recall, a witness told Gothamist she was exiting the station when she realized she was walking next to a man holding a notebook and an iPhone turned face down. The witness, who asked to remain anonymous because she believes the creep also works in DUMBO and she fears retaliation, says she saw him pointing his phone up a woman's skirt:

I noticed he was holding his arm a bit outstretched, close to the woman in front of him walking up the stairs. It seemed odd, so I watched the guy as we walked up the ramp. He passed the woman, then slowed again as we reached the next set of stairs, and let her pass him. That is when I confirmed that he was filming under her skirt.

I stopped him, alerted the woman, and as he tried to walk away, we saw that he did indeed have the video on. We both followed him for several blocks (crazy, I know), and then reported it to the police. He went into the building above Peas & Pickles [a grocery on Front Street].

The incident happened on August 20th, and the detective handling the investigation tells us there are "no leads yet." It may be that police have had trouble catching the alleged perv because, as the witness told us, "he looks like most people who work in Dumbo (a bit hipster-ish)." Previously on Upskirt Summer 2012, a prominent urologist at Mount Sinai was allegedly caught taking upskirt video with a spy pen, and the Metropolitan Museum of Art opened the upskirt Nirvana art installation "Cloud City" on its roof. 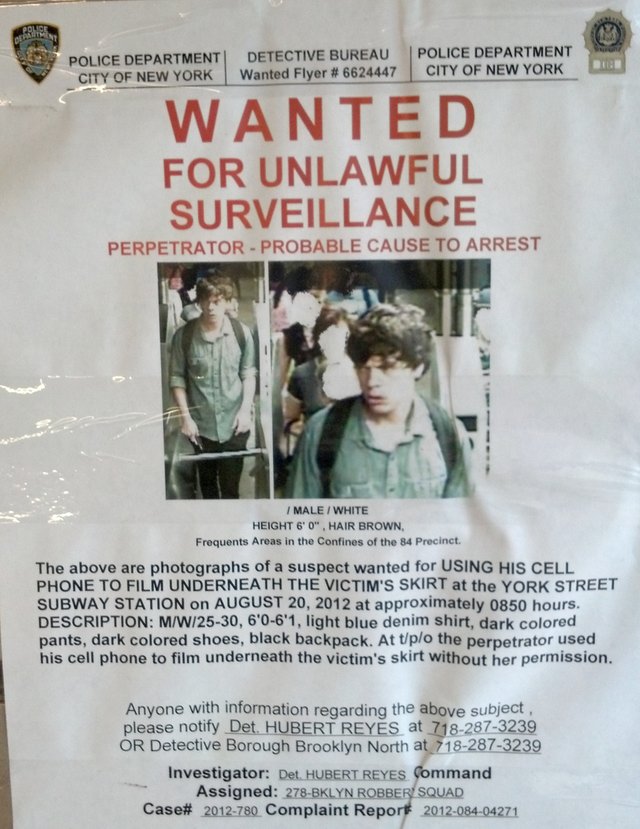