While the vast majority of New York's Airbnb hosts have managed to skirt the law prohibiting short-term sublets, it appears the city is taking a harder stance when it comes to the matter of slapdash Brooklyn roof rentals.

Last week, the Mayor's Office of Special Enforcement issued up to $55,000 in fines to the owner of a DUMBO building after inspectors found five illegally constructed residential rooms on the building's roof. Three of those five units were occupied by tourists from London, Minneapolis and Massachusetts, all of whom had responded to a since-deleted Airbnb listing. One occupant was reportedly sleeping when inspectors burst into the room (apparently with cameras flashing). 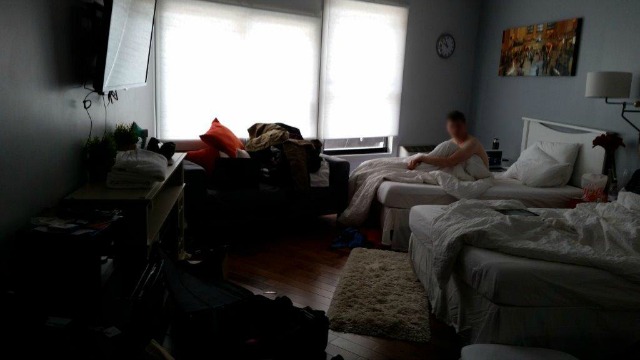 Each of the guests paid between $125 and $150 for the private rooms, which included a washer, dryer, separate utility room and access to a "rooftop hallway." The city found that the Airbnb host, one Isaac Amar, had allegedly listed the rooftop units on five separate occasions, and received 40 reviews—most of them positive.

"With illegal construction, including dangerous and unpermitted gas and electrical hookups, the property owner and an Airbnb host showed an astonishing disregard for the safety of visitors to the city," said Christian Klossner, executive director of the Mayor's Office of Special Enforcement. "These rooms, on the roof of a manufacturing building in DUMBO, offer one more example of how dangerous illegal rentals can be."

The two-story building on 140 Plymouth Street is owned by the Plymouth Realty Group, and is certified for manufacturing on the first two floors, according to a summons shared with Gothamist. The city immediately issued a vacate order, citing an imminent danger to life or public safety. Representatives with Plymouth Realty Group could not be reached.

A spokesperson for Airbnb told Gothamist, "Safety is our top priority and we have many steps in place to ensure our hosts provide a safe environment for their guests. The overwhelming majority of New York City hosts share their own home occasionally to earn a little extra money; those are the folks we're fighting to protect."

But according to some officials, this illegal rooftop listing only serves as further evidence of the company's damaging presence in a city that has passed legislation making most Airbnb listings illegal.

"Time and time again, Airbnb claims that it's scraped its website of illegal listings, yet time and time again, we find listings that are not merely illegal but also dangerous, proving that Airbnb cannot be trusted," Assemblymember Linda B. Rosenthal (D/WF-Manhattan) told Gothamist. "Airbnb claims that it can be a good partner, but it continues, with astonishing impunity, to enable dangerous illegal activity that puts people's lives at risk and deepens our affordable housing crisis."

As noted by a city spokesperson, the fines levied against the property owners are not related to last year's Airbnb law, which forbids advertising short term rentals of "multiple dwelling units," and does not apply to buildings certified for manufacturing. In either case, Airbnb could not be held liable, as the company has since reached a settlement with the city clarifying that the new law would only penalize individual violators.

According to the summons, Plymouth Realty Corporation was issued violations for work without a permit ($1600); occupancy contrary to the certificate of occupancy ($2,400); failure to provide fire alarms for transient use ($1,600); failure to provide adequate egress for transient use ($1,200); and illegal conversion of three or more units ($3200 base plus $1000 per day). With daily fines factored in, the penalties could total $55,000, the city said.

#airbnb
#dumbo
#Plymouth Realty Corporation
#rooftop
#original
Do you know the scoop? Comment below or Send us a Tip