Dueling Legislation, But Who's Harassing Who? 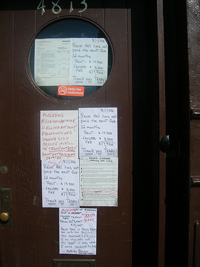 Two bills are facing off in the City Council these days, pitting the rights of landlords against the rights of tenants. Both seek to end legal harassment of one group against the other. In one corner, we have the bill introduced by Council members Daniel Garodnick and Melissa Mark-Viverito. It seeks to curb harassment of tenants by landlords who withhold services (e.g. heat, disrepair) by allowing them to file restraining orders against their landlords. The current system requires tenants to head to housing court. In the other corner, we have a bill introduced by Council members Leroy Comrie and Thomas White Jr. that would protect landlords from legal harassment from tenants. They fear that frivolous lawsuits could bankrupt small-scale property owners.

The Bloomberg administration and Council Speaker Christine Quinn are siding with Garodnick and Mark-Viverito's bill. Quinn says that it is a "historic step forward for tenants," and officials from the Mayor's office testified in favor of the bill. Comrie and White Jr. want the city to review tenants' legal claims before they head to court, to see if tenants have a record of initiating legal proceedings against their landlords.

On Sunday, The New York Times ran a story on a building in the Bronx, where tenants don't so much live as survive. It may be one of the warmer winters on record, but the building has been without regular heat and hot water for months.

Residents dress for the outdoors even while indoors, wearing scarves and hats. They use the stove as if it were a fireplace, huddling around it with the burners aflame and the oven turned on. They wash up in the mornings with water heated in pots. At night, the temperature drops to the low 30s in the stairways and hovers in the 40s and 50s in the rooms.

It's a grim tale of meager living, to say the least.

A post on the city's worst landlords and one on how costs for landlords are out pacing their ability to increasing rents on rent stabilized apartments. The photo in this post was placed on flickr last year, chronicling a severely strained tenant-landlord relationship.