Cycling advocates were jubilant at the results of separate Quinnipiac and Marist polls that showed New Yorkers supporting bike lanes by 59 and 66 percent, respectively. Well, it appears that what those polls hid was good ole' NYC apathy: former Gallup pollster David Moore points to the fact that neither poll gave respondents a third "No opinion" option, and a new poll conducted by Art Science Research Laboratory showed that 56 percent of New York residents surveyed have "No opinion," while 23 percent favor, and 21 percent oppose bike lane expansion. Historians, did Mark Twain ride a bicycle? 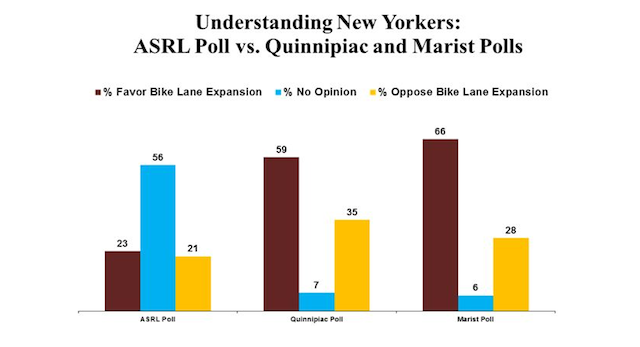 Moore believes that one reason the polls produced "unbelievable" results is the way they "stacked the deck" with their poll by asking a "forced choice question," and not giving respondents the option to say "no opinion." This is important, he says, because, "Based on polling I’ve done and seen on jillions of other issues over the years, I would estimate about a third to a half of New York City voters don’t really care one way or the other." Why don't pollsters always use the "no opinion" question? Polling outlets " feel it’s not newsworthy if, say, 30% to 40%  or more of the public has no opinion." Both polls allowed for people to say "no opinion" themselves, but did not provide it as an option along with the question.

The larger issue Moore has with the polls is that they assume that respondents are familiar with the bike lane controversy. Only 6% of respondents in the Quinnipiac poll stated they had "No opinion." Moore writes: "Quinnipiac wants us to believe that 94% of New Yorkers pay attention to the expansion of bike lanes? Sorry, I don’t believe it." Indeed, 29 percent of Americans can't name the Vice President (Dan Quayle?). By not asking an "awareness question" before continuing, the pollsters "tainted the sample" by feeding participants information.

But doesn't that mean we should just stop commissioning polls? If most surveys outside of "Do You Like Miracle Whip" are going to produce "no opinion" results, what's the point? Should every poll be entitled "Americans Still Don't Care, Need A Nap"?

#bike lanes
#bikes
#cycling
#dot
#marist
#mayor bloomberg
#quinnipiac
Do you know the scoop? Comment below or Send us a Tip