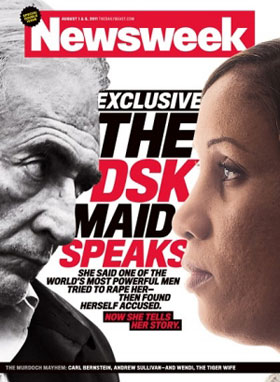 The hotel maid and Guinean immigrant who is accusing former IMF head Dominique Strauss-Kahn of sexual assault has revealed herself in dual interviews: In a bid to counter suggestions that she was lying and tabloid speculation that she's a "hooker", 32-year-old Nafissatou "Nafi" Diallo spoke to Newsweek about her ordeal in a three-hour session at her attorney's offices in Midtown. "Because of him they call me a prostitute," she says, "I want him to go to jail. I want him to know there are some places you cannot use your power, you cannot use your money." And in an interview with ABC News, Diallo says, "God is my witness I'm telling the truth. From my heart. God knows that."

Newsweek says that Diallo is "not glamourous," citing "faint acne scars" and her "hennaed, straightened" hair, but they also note her "womanly, statuesque figure." She is unable to read or write in any language, and the interview was only "upbeat" when she recounted the "small promotions and credits available at the Sofitel for a job well done." Diallo also wept during the interview, and the magazine notes that "there were moments when the tears seemed forced." Asked to describe her apparently harrowing past, the interviewers were met with "vague responses," but the account of her alleged assault at the Sofitel was "vivid and compelling." She offers a graphic narrative of being violated by "a crazy man."

Believing Strauss-Kahn's suite was empty, she entered it with her standard verbal announcement:

“Hello? Housekeeping.” Diallo looked around the living room. She was standing facing the bedroom in the small entrance hall when the naked man with white hair appeared. “Oh, my God,” said Diallo. “I’m so sorry.” And she turned to leave. “You don’t have to be sorry,” he said. But he was like “a crazy man to me.” He clutched at her breasts. He slammed the door of the suite.

Diallo is about 5 feet 10, considerably taller than Strauss-Kahn, and she has a sturdy build. “You’re beautiful,” Strauss-Kahn told her, wrestling her toward the bedroom. “I said, ‘Sir, stop this. I don’t want to lose my job,’” Diallo told NEWSWEEK. “He said, ‘You’re not going to lose your job.’” An ugly incident with a guest—any guest—could threaten everything Diallo had worked for. “I don’t look at him. I was so afraid. I didn’t expect anyone in the room.”

“He pulls me hard to the bed,” she said. He tried to put his penis in her mouth, she said, and as she told the story she tightened her lips and turned her face from side to side to show how she resisted. “I push him. I get up. I wanted to scare him. I said, ‘Look, there is my supervisor right there.'” But the man said there was nobody out there, and nobody was going to hear.

Diallo kept pushing him away: “I don’t want to hurt him,” she told us. “I don’t want to lose my job.” He shoved back, moving her down the hallway from the bedroom toward the bathroom. Diallo’s uniform dress buttoned down the front, but Strauss-Kahn didn’t bother with the buttons, she said. He pulled it up around her thighs and tore down her pantyhose, gripping her crotch so hard that it was still red at the hospital, hours later. He pushed her to her knees, her back to the wall. He forced his penis into her mouth, she said, and he gripped her head on both sides. “He held my head so hard here,” she said, putting her hands to her cranium. “He was moving and making a noise. He was going like ‘uhh, uhh, uhh.’ He said, ‘Suck my’—I don’t want to say.” The report from the hospital where Diallo was taken later for examination notes that “she felt something wet and sour come into her mouth and she spit it out on the carpet.”

After the incident occurred, Diallo said she fled the room, but then returned to cleaning as a sort of "solace in resuming her routine." After turning to authorities, she became afraid of what Strauss-Kahn could do to her after watching her case appear on the news: "“I watched Channel 7 and they say this is [the] guy—I don’t know—and he is going to be the next president of France. And I think they are going to kill me.”

Strauss-Kahn's attorney tells the magazine, “What disgusts me is an effort to pressure the prosecutors with street theater, and that is fundamentally wrong.” The defense is expected to bring up inconsistencies in her initial account that Strauss-Kahn said nothing to her, and her dubious associations with criminals who manipulated her bank account discredit her claims against their client. Of the man in an Arizona jail she allegedly told, "I know what I am doing," she claims she was used by him for the faux-designer handbags he gave her: “He was my friend that I trust—that I used to trust.”

French authorities continue to investigate sexual assault allegations from his supposed victims in France, including journalist Tristane Banon, and are now looking into reports that Strauss-Kahn kept an apartment in Paris for his sexual liasons.