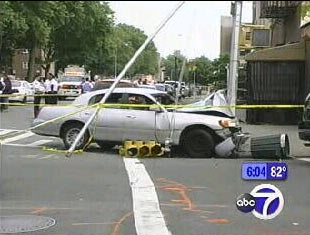 An afternoon spree of shootings and carjackings by one man was ended yesterday by police, who fatally shot the suspect in a gun battle where 130+ shots were fired. A 23-year-old named Victor Gordon, with ten arrests already listed on his rap sheet, left his girlfriend's apartment on President St. after an argument. He walked over to St. Paul's Place just south of Prospect Park––perhaps stopping at a few bars along the way––and stole a Dodge Charger at gunpoint just before 2 p.m. He drove it back to the home of his ex-girlfriend, where he began firing shots into her front door. The Daily News reports that Gordon was visibly drunk at this time. As he stumbled down the steps from her building, he dropped his gun and then picked it up and brandished it at a group of children playing nearby.

After driving off, he soon crashed the Charger into the security gate of an unoccupied storefront at Pacific St. and Troy Ave. then ran from the scene. When he came upon a nearby Nissan Maxima at Pacific St. and Albany Ave. he tried to force the occupants out of the car, but it sped off. A shot intended for that driver wound up hitting a man sitting in a Jeep Cherokee nearby, although the wounded man's wife says that her husband was shot when trying to replicate the Maxima's getaway, according to the New York Post's account.

Thwarted from stealing the Maxima, Gordon stumbled two blocks down Albany to Bergen St., where he forced the driver of a Lincoln Town Car out of his vehicle and again sped off. The drunken gunmen only made it three blocks before he crashed the Lincoln into a lightpost. Witnesses urged him to get out of the car according to the Daily News, with people screaming ""Gas is leaking!" Good Samaritans backed off when they saw that Gordon was reaching for his gun. When EMS workers arrived, he pointed his gun at them and they also retreated.

Police arrived on the scene only to have Gordon open fire on them as soon as they got out of their car. He was screaming "F--k you!" repeatedly when the officers returned fire and he fell to the ground, but continued to fire. Altogether, 130 shots or more were fired during the gun battle and police said that the cops may have been responsible for as many as 90 of them. This means that Gordon must have reloaded at least once before he was eventually killed.

The Daily News closes its article with the obligatory good-boy quote from a relative, "'He's very quiet when he's with the family,' said the dead man's aunt, Doris Mears, 45."