The boat captain who crashed his vessel into runway approach lights at Laguardia Airport—during an alleged drunken "three-way sex romp"—was in court yesterday. And, naturally, the Post was there to feed from his shame.

Craig Gallo, 51, sporting a massive bandage on his forehead and wearing baggy red hospital scrubs, whined when he learned in Queens Criminal Court that both his boating and motor vehicle licenses would be revoked for allegedly operating his fishing vessel while drunk.

“The officer told me it was just going to be my boat license,” he sniffed in court.

Apparently Gallo wasn't even at the helm when it crashed on Saturday; the Post had reported on Monday, "The wild night began Saturday in a tavern in College Point, Queens, where...Gallo... James Benenato, 60, and Mary Ann Belson, also 60, began chatting between drinks, another source said.... Gallo, who lives in New Jersey and works for a financial company on Long Island, invited them aboard for a moonlight cruise. And before very long, the boat was rocking." Eventually, it went into the pier. 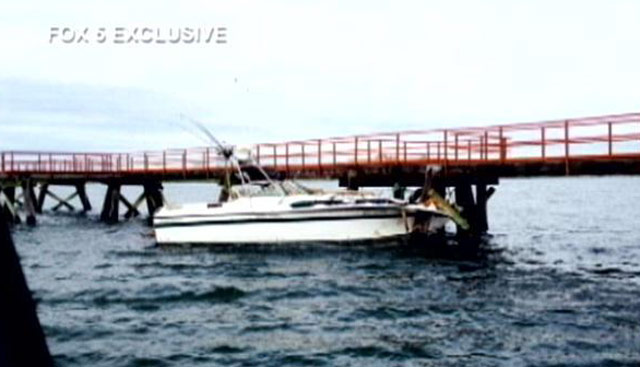 Further, "Photos taken after the crash showed a dozen or so Budweiser beer cans overflowing a bucket and strewn about the deck and cabin, with sheets and clothing strewn about the ship’s cramped cabin." Gallo refused to take a Breathalyzer test.

Gallo suffered facial injuries, as did Belson. Benenato escaped the dangerous yet sexxxxy evening without injury. The incident also raised security concerns, because the Port Authority's navy only operates in the day, so when this crash occurred, the Port Authority had to call the NYPD.