Drunk Lawyer Throws Panties At Cops, Tells Them To "Eat My Ass"

If you've ever fallen victim to the whims of your drunk alter-ego, you've probably done a few things you regret, like losing your keys or participating in SantaCon. But for one Brooklyn lawyer, a particularly rough night out in Williamsburg ended in a boozy altercation with cops, in which she reportedly threw her underwear at police officers and screamed at them to "Eat my ass, you f--king pigs!” Now, of course, she has some regrets. 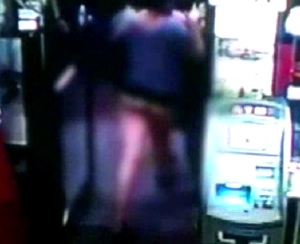 According to the Post, Stephanie Hendricks, a 39-year-old business attorney with an office in downtown Brooklyn, went drinking in Williamsburg over the weekend after her boyfriend broke up with her. Unfortunately, the combination of high emotions and high blood alcohol content have the power to reduce even the best of us to maniacal college freshmen, and after buying a one way ticket straight to Blackout City, Hendricks apparently found herself having quite a night.

Around 2:30 a.m. on Saturday, she jumped out of a cab near a neighborhood deli, and when cops tried to confront her over the unpaid $6 fare, witnesses say she took off her underwear, flashed the cops, lunged at them and screamed, "Suck my p---y,’’ and, “Eat my ass, you f--king pigs!” at them. "She...showed everything to the cop...She had no panties," a deli worker told the Post. "The cops were saying, ‘Calm down, lady. Calm down. Be cool."

Hendricks was arrested and charged with theft of services, resisting arrest and disorderly conduct, among other things. We spoke with her today, and she was understandably embarrassed by the incident. "I got intoxicated, so I don't remember anything from a certain point in the evening," Hendricks, who told us she'd been at a client's bar in Williamsburg that night, said. "All of that is just drunken nonsense." And she wanted to formally apologize to the police officers and the bodega workers who witnessed the meltdown. "I really made a mistake," she said. "All I can do is accept civic responsibility for it." Don't worry—things could be a lot worse.

#brooklyn
#cops
#downtown Brooklyn
#drunk stuff
#stephanie hendricks
#williamsburg
#original
Do you know the scoop? Comment below or Send us a Tip