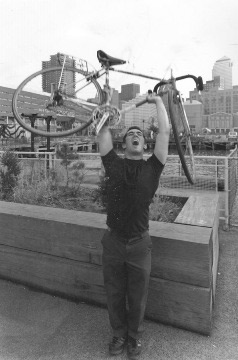 Eugenio Cidron, the man who killed bicyclist Eric Ng in 2006 after driving drunk down the West Side bike path instead of the West Side Highway following a holiday party at Chelsea Piers, was sentenced yesterday to three to 10 years in prison. Cidron had driven over a plastic pylon to enter the path from Chelsea Piers and had been driving south for a mile before hitting Ng, who was traveling north.

Cidron, who pleaded guilty to 2nd-degree vehicular manslaughter, reportedly drank so much at a Christmas party his blood alcohol level was twice the limit at 0.16. Ng, a 22-year-old NYU grad waiting to hear about a public school teaching position, had taken the bike path from Tribeca to head to a party in the East Village. The prosecutor said Ng was hit so hard "fractures, contusions and lacerations covered every inch of [his] body."

The victim's mother gave prosecutors a statement to read at the sentencing. Wendy Ng lamented how Cidron "turned my precious son into road kill," but also wrote, "Although his father and sister may not have reached that point yet, if it is of any comfort to you, coming from the mother who loved him more than life and would gladly have traded places with him, I forgive you, Eugenio." Streetsblog's Charles Komanoff was at the sentencing and wrote about it: Apparently Cidron had been driving 60 MPH.

Transportation Alternatives' Wiley Norvell told Metro, “We take no pleasure in this [sentencing]. If Eugenio Cidron had been sober and had the same offense, we would not be looking at the same charges and sentence. A prison term for killing a cyclist or pedestrian is unusual — especially so if the driver has not been drinking. Reckless drivers aren’t held accountable, especially when they’re sober."

A ghost bike was placed at the site of Ng's death in December 2006, with an accompanying memorial ride. The 3rd Annual Memorial Ride & Pedestrian Memorial Walk to remember those killed by drivers in New York City is scheduled for this Sunday, January 6. And Streetsblog points out hazards have gone unfixed on the bike path.