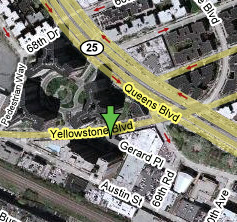 The driver fled the scene, but witnesses called the police with the license plate number. The police arrested the suspect, Susan Karnabe, 54, of Rego Park; she was charged with DWI, vehicular assault, reckless endangerment, and leaving the scene of an accident.

The 3-year-old was critically injured, while her grandmother and great-grandmother are in stable condition.

#crime
#forest hills
#maps
#police
#queens
#rego park
#The Police
Do you know the scoop? Comment below or Send us a Tip