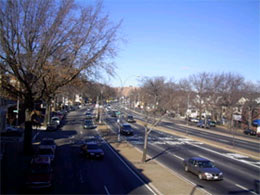 A 66-year-old man driving a Nissan Maxima was fatally hit by a drunk driver on Woodhaven Boulevard, between 101st Avenue and 97th Avenue in Ozone Park. Twenty-five-year-old Christopher Rivera, driving a Honda Accord, crossed the road's median around 10:45PM and slammed into the Maxima driving in the opposite direction. The Maxima then hit a third car, a BMW.

The Maxima's driver was pronounced dead at the scene, his passenger was injured, as well as Rivera and his passenger and the two occupants of the BMW, all with non-life-threatening injuries.

Rivera, who lives 2 miles from the crash scene, was charged with DWI, vehicular manslaughter, and manslaughter. His uncle told the Daily News, "He must have been going really fast. He's a bit of a handful, but a good kid who made a bad, bad, bad mistake."