Last night's General Assembly meeting in Zuccotti Park was "one of most contentious ever," in large part due to a heated debate over whether the drummers at Occupy Wall Street should be given $8,000 from the movement's coffers to buy more drums and equipment. It seems some of the drums were stolen or vandalized, and the drummers asked the General Assembly to help them regroup. "We have worked for you! Appreciate us," one drummer told the crowd, but the appeal was denied, and the Huff Post's Craig Kanalley tweeted, "Drummer who didn't get money from GA tonight now yelling, cursing at members of GA." Meanwhile, another member of the drum corps was lashing out at the Community Board meeting.

"I am an occupier, I am a drummer, and, despite what they say, I am also a human being," Ashley Love, a young member of the OWS People of Color Working Group, told the packed Community Board meeting last night. Mother Jones reports that Love was met with booing when she informed the locals, "It's primarily a commercial area; not too many people live there. The majority of the drummers are people of color with low-income or no-income backgrounds, and Wall Street was built by slaves when they brought the Africans over here. The council people back then prohibited drumming because it was a way of protesting. It was a way of communication. And I just think you guys are scapegoating us." 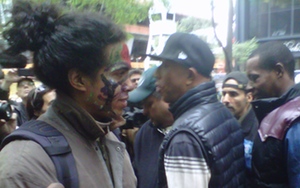 One of the biggest complaints from local residents is the noise at Zuccotti Park, and last night the CB 1 committee passed a resolution limiting "the use of drums, trumpets, tambourines, bugles, and air horns to two hours per day, in midday." But the drummers want to expand, not contract. "We need to grow," drummer Elijah Moses, 19, of Astoria, said last night. As luck would have it, Russell Simmons was down at Zuccotti park handing out cash this afternoon. Jonathan Vergara, a music producer, tells us, "He gave one girl who said it was her birthday twenty dollars. She showed her ID and everything. I saw inside his wallet he had 300 dollars cash in there!" Explaining his affinity for the Occupy Wall Street protesters, Simmons tells the Speakeasy, "I’m part of the 100%. If those people suffer, I suffer with them." 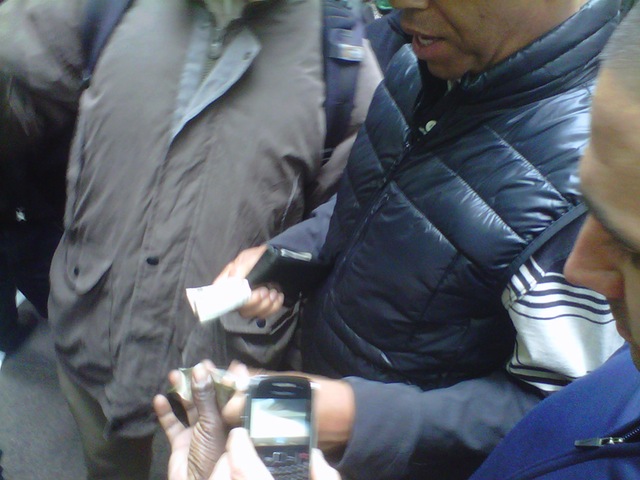 #drumming
#noise complaints
#occupy wall street
#ows
#zuccoptti park
Do you know the scoop? Comment below or Send us a Tip