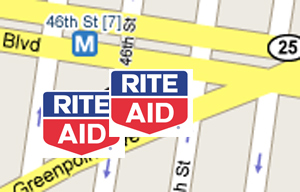 New Yorkers like to joke about the spread of chain drugstores, bank branches, and Starbucks in the city, but residents of Sunnyside, Queens can claim bragging rights in a shining example of the phenomena. Greenpoint Avenue is home to two adjacent Rite Aid drugstores, which sit literally right next to each other.

According to the Daily News, it initially appears to be one giant store, but, in fact, they are two separately owned and operated drugstores separated by a single wall. At least one neighborhood resident was disoriented after walking out of one store and then almost back into the second: "I said to myself, 'Wait. Didn't I just come out of Rite Aid?"

The newer of the two stores used to be an Eckerd pharmacy before the chain was acquired by Rite Aid. Now the two stores co-exist side by side on Greenpoint Ave. There is a third Rite Aid pharmacy three blocks away on 45th St. and 43rd Ave. If one has further trouble finding a Rite Aid, there's always the chain's store locater.

Company officials said that market research supported the decision to have twin stores on the street, but wouldn't comment to the Daily News on the financial performance of any of the three in the area. The president of the neighborhood's chamber of commerce wishes there were fewer drugstores and more businesses that would make Sunnyside a tourist destination, "like the Gap."