A Harlem man believed by authorities to be a high-level drug trafficker was arrested last month while allegedly accepting a USPS express shipment of cocaine boxed up with wrapped presents, a stuffed Minion, and other children's toys.

"Kilos of cocaine were disguised as children’s birthday gifts, and shipped alongside innocent looking Olaf dolls and other toys, in a failed attempt to conceal the sinister contents," said Special Narcotics Prosecutor Bridget Brennan in a statement.

Albert Fortosa, 24, of Harlem was arrested on July 2nd at 230 West 111th Street. According to the Special Narcotics Prosecutor, Fortosa dropped the package and attempted to run away when police confronted him. As a result, he was charged with resisting arrest, in addition to numerous drug charges.

In the weeks leading up to Fortosa's arrest, inspectors for the U.S. Postal Service intercepted a total of five packages en route to Fortosa from Puerto Rico, containing five kilograms of cocaine valued at $225,000. In each package, the cocaine was stuffed into a wireless internet router box. 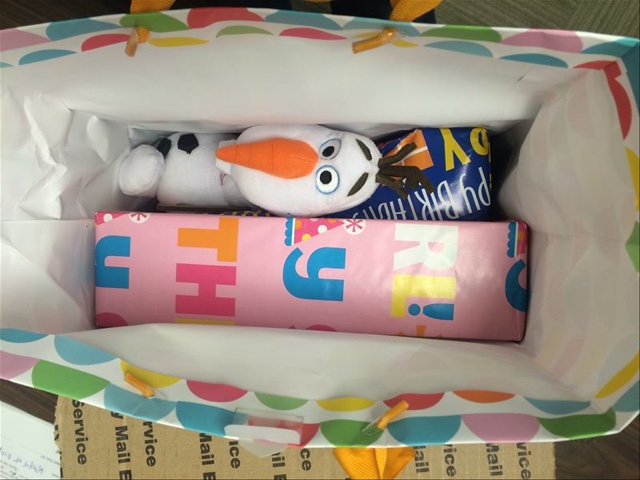 More arrests followed on August 4th, concluding a wiretap investigation that had been ongoing since September 2014. Daniel Reyes, 26, allegedly runs a drug delivery service in Bushwick that sells heroin, MDMA, and Xanax in addition to cocaine; Derek Santana, 25, of Boerum Hill, is believed to have sold drugs regularly at clubs in Brooklyn and Manhattan; Joseph Owens, 44, of Harlem, allegedly worked closely with Fortosa. Over the course of the investigation, the men allegedly sold more than $41,000 worth of drugs to undercover officers from the NYPD’s Vice Squad on 20 different occasions, in Brooklyn and on the Lower East Side.

The group has been charged in a 71-count indictment including numerous charges of conspiracy, as well as possession and sale of a controlled substance. A press release from the office of the Special Narcotics Prosecutor describes Fortosa as "top of the food chain" for the group's heroin, coke, MDMA and marijuana.

Fortosa pled not guilty in Manhattan Supreme Court last week, and his bail was set at $250,000. Reyes is scheduled to appear in court today, while Santana and Owens have a court date on Thursday.