Drop Something Precious Down A Sidewalk Grate? Here's How To Get It Back

A woman employed by the Macmillan publishing house was strolling along Fifth Avenue with her co-worker Monday afternoon when a ring slipped off her finger and tumbled down into the impenetrable darkness beneath a sidewalk grate. And there it would have stayed for millennia, passing out of history and into legend, had it not been for two brave Con Ed workers sent on a quest into the bowels of the Flatiron District to bring it back.

"My friend was devastated," says Murph Holder, who at the time was walking alongside bestie Alex Strelow, seen above with her precious. "She bought it in London eight years ago on a super special trip with friends; it was handcrafted for her by a silversmith at a market. But it gets loose when the weather changes, and she's a very animated speaker, so this wasn't the first time it fell off her finger. She's actually lost it four times, but she always jokes that the ring finds its way back to her." 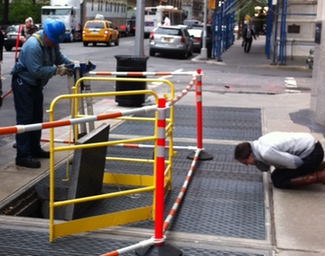 "We must have The Precious! They stole it from us!"

But yesterday it seemed all hope was lost, and the ring would surely one day find its way into the hands of some filthy little hobbitses. Still, Holder didn't panic, and when they returned from their lunch hour, she did some Googling and discovered a similar incident that was resolved with a simple call to 311. Holder did just that, and was instructed to contact the management company of the building by the grate. Within a half hour, they called back, and informed her it was a Con-Edison grate.

"Con Ed couldn't have been nicer," Holder tells us. "They immediately contacted a crew and arranged for them to come open the grate. They even asked what time we were planning on leaving work so the crew could arrive before we needed to leave. By 4 p.m. we got a call that a crew was at the grate, and we ran outside and down the block to be met by Emil and Robert—our two new best friends." (A Con Ed spokesman tells us "Not a lot of New Yorkers lose valuable jewelry in grates, that’s why it’s news.")

The two workers searched in the muck and trash for about a quarter of an hour to try and find the ring, and just as the ladies were "losing hope," they heard one of them shout: "I found it!" The ring had rolled under a transformer box, and Holder says one of the men had to lie down in the muck to fish it out. "At that point we made a pact that even if it wasn't her ring that he brought up, we would pretend it was and act excited and appreciative," says Holder.

But it was the The Ring, forged so long ago in the fires of London's evil Portobello Market. After a brief tussle—during which the two Con Ed workers were brutally slain, along with several bystanders—a bloodied Strelow triumphantly slipped The Ring back on her finger, where it was destined to remain... until the next time she loses it. We jest—the two ladies thanked the Emil and Robert profusely, offering them fresh-baked cookies, which they stoically declined. (They know better than to trust that weird Elven stuff.)