A new city program to designate a few hundred parking spaces for car-sharing programs has drivers fuming, alleging that the initiative will make it more difficult to own a car in New York—which, uhh, is really kind of the point here.

Announced by Mayor Bill de Blasio on Thursday, the two-year pilot program will reserve 285 parking spots for Zipcar and Enterprise CarShare in select neighborhoods. The idea is that providing additional curbside parking for those services will reduce dependence on private cars, helping to alleviate the city's ever-worsening congestion crisis.

As evidence that similar efforts have worked for other cities in the past, the city cites a study from the Mineta Transportation Institute indicating that between 23 and 32 percent of carshare members in U.S. cities sold their personal vehicles, and up to 68 percent delayed buying a personal vehicle. The study also found that a single carshare vehicle could remove up to 20 cars from the road.

Despite the apparent benefits, it's important to remember the inalienable right of motorists to store their private property on public streets for free. The Times has the scoop on how the authentic, automobile-loving New Yorkers are reacting—an Upper West Side woman says it's already hard enough to find free parking in her neighborhood, while an Upper West Side man still "dreams of owning a BMW sports car" to commute to Midtown, but welcomes the car-share program "for now."

"You’re basically taking those spaces off the plate there for the public,” John Corlett, the legislative committee chairman for AAA, told the paper. "It’s a valuable commodity they are handing over to a private, profit-making company." Currently, the vast majority of the city's roughly 4 million parking spaces are free. We reached out to Corlett to ask whether he thinks the city should charge for this valuable commodity, but have not heard back. 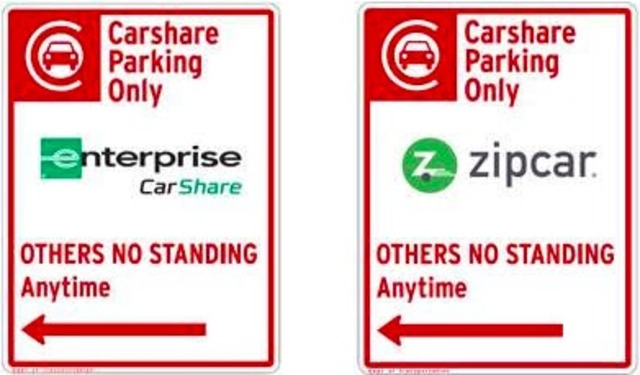 Meanwhile, the News Wheel, a blog for people who love wheels and other car parts, claims that the new policy will impact "primarily low-income individuals." No evidence is provided for the claim. The median income of city residents who own a car is $85,000 a year, compared to the city average of about $50,000.

At a press conference on Thursday afternoon, DOT Commissioner Polly Trottenberg explained that the pilot was aimed at areas of the city where car owners don't use their vehicles frequently, like the Upper West Side, and at neighborhoods that don't have easy access to other parts of the city, like the Rockaways. The neighborhoods receiving designated on-street parking for car-shares are: Boerum Hill, Brooklyn Heights, Cobble Hill - Carroll Gardens, East Williamsburg, Park Slope, Red Hook, Williamsburg, Eastern Rockaways, Jackson Heights, Jamaica, East Harlem, Hamilton Heights, Morningside Heights.

"Right now the status quo isn't acceptable, so our job is to create more and better options for New Yorkers to get around," de Blasio added. "There's a lot of people who have their cars in a parking space all week long, but only use it on the weekend. That's not optimal."

If the mayor really is serious about disrupting the parking status quo—and now that he's promised to ditch his car once he moves back to Brooklyn—here's what a few more optimal scenarios might look like:

UPDATE: Reached for comment, John Corlett, the legislative committee chairman for AAA, told Gothamist: "Car sharing programs provide a valuable alternative to private car ownership for city residents. That being said, public streets should be for public parking and appropriating scarce on-street parking spots to private commercial ventures raises fairness questions. New Yorkers know all too well that parking is a challenging and expensive proposition and whether City residents will receive fair value for this appropriation of public spaces remains to be seen."

#carshare
#congestion
#dot
#enterprise
#parking
#parking spaces
#polly trottenberg
#zipcare
Do you know the scoop? Comment below or Send us a Tip
A new Gothamist is coming! We’ve moved comments over to our beta site. Click here to join the conversation and get a preview of our new website.