Drivers Get Away With Murder In NYC, But New Laws Could Finally Change That

A broad coalition of City Councilmembers who rarely see eye-to-eye on the same issue came together today in an attempt to reform the NYPD's appalling handling of accident investigations. "The NYPD's crash investigation system is fatally flawed," Councilmember Brad Lander said at a City Hall press conference this morning. "40% of the time when someone is killed, nobody even gets a traffic ticket." Indeed, a shocking City Council hearing in February found that the city's Accident Investigation Squad [AIS] will only investigate accidents in which the victim dies or seems likely to die. 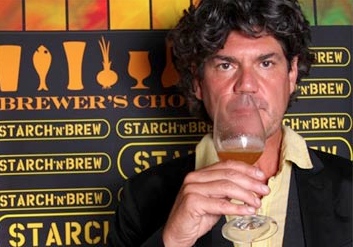 D.B.A. owner Ray Deter, who was killed while riding his bike last year. Marijuana was found in the driver's car, but no criminal charges were filed.

If you get hit by a reckless driver and end up in a wheelchair for the rest of your life, there's no AIS investigation, even though state law requires a thorough investigation in the event of "serious physical injury." The patrol officers will fill out an accident report, and traffic tickets might be issued, but there will never be an in-depth investigation or follow-up. And NYPD policy prohibits regular officers from pressing criminal charges unless they personally witnessed the traffic crash. This is partly why criminal charges are rarely filed for a majority of so-called accidents.

Ray Deter, the owner of the D.B.A. bars, was killed by a Jaguar driver while riding his bike through the intersection of Canal Street and West Broadway. Although the driver had marijuana in his vehicle, and admitted under oath that he was probably exceeding the 30 mile per hour speed limit, he walked away from the accident without criminal charges. Deter's widow and his 19-year-old son Jake attended today's press conference, and Jake gave this moving statement:

The driver who took my father’s life was just 24, a few years older than myself. But in just 3 years of driving, he received 7 moving violations on his license - so many that he had to take a defensive driving course. Even so, at a DMV hearing to review the accident, the driver admitted under oath that he was probably exceeding the 30 mile per hour speed limit when he hit my father.

Our family just received the NYPD’s Accident Investigation Squad report on the crash. The driver’s speed isn’t mentioned. Apparently police never measured the skid marks left by the car, or even asked the driver what speed he was going. The driver had marijuana, rolling papers, a lighter and Visine with him, but he was permitted to walk away from the crash scene with a ticket for marijuana possession and no so much as a moving violation.

Driving is a privilege and not a right. Speeding and other forms of reckless driving need to be taken seriously on the streets of New York. Of course people make mistakes and not every traffic death involves a crime. But NYPD has to thoroughly investigate serious crashes, or at the very least question the key participants, to find out what happened. In this case they failed to do that. They just blamed the victim... Ray is gone and none of this will bring him back or replace his life, but by speaking here we hope we can help make the streets of New York City safer for all by winning procedures to protect victims and ensure accountability for reckless drivers. 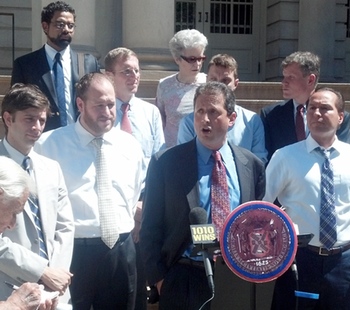 Councilmembers Brad Lander, James Vacca, Peter Vallone, Jessica Lappin, Stephen Levin, David Greenfield and Letitia James are introducing a variety of bills today in an attempt to reform the NYPD's handling of crash investigations. Chief among them is the creation of a Traffic Crash Investigation Task Force, which would review the AIS procedures and recommend changes. The task force would be comprised of four mayoral appointees (to include reps from the NYPD, DOT, and DOH), representatives of all five local district attorneys' offices, two City Councilmembers, and three transportation safety advocates.

"It's a perverse system," said Councilmember Greenfield today. "Currently, we're saying to the drivers of New York City: Be reckless, drive drunk, unlicensed, run people over, and nothing is going to happen to you. On many nights there is one AIS police officer in the entire city conducting investigations. God forbid you have two accidents in one night! The NYPD has a budget of $4.5 billion a year. If the NYPD wants to put more people on the ground to hold reckless drivers accountable, they can do it."

"Two thousand New Yorkers are seriously injured by reckless drivers every year, and drivers get the message the city doesn't care," said Paul Steely White, Executive Director of Transportation Alternatives. "Last year we stood outside 1 Police Plaza and asked NYPD Commissioner Ray Kelly to do something about it, and we heard nothing. We went to Mayor Bloomberg and he did nothing. We're glad the City Council is doing something." 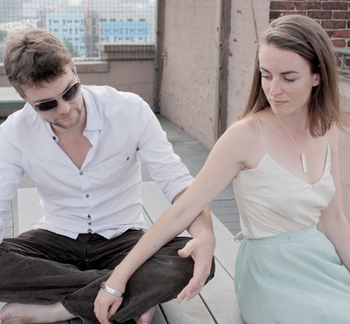 Something is better than nothing, but it's worth noting that even if the task force is created and the legislation is passed, most of it is still non-binding. "Mayor Bloomberg and Ray Kelly could do everything we're asking for today," Lander said, emphasizing that "the reforms we're calling for are within state law." And Councilmember Vallone, a former prosecutor, said, "The police I speak to say they don't disagree this is an arbitrary line, that line past which they won't investigate an accident unless it's fatal. But they say, 'We don't have the resources and we have to draw that line somewhere.' "

Excuses like that must be infuriating for the loved ones of victims like Clara Heyworth, who was fatally run over in Fort Greene last year. Heyworth's death was witnessed by her husband, Jacob Stevens, but the incident was so traumatic that the moment of impact is blocked out from his memory. She'd been hit by a driver named Anthony Webb, 43, who was driving with a learner's permit that prohibited him from operating the vehicle without supervision. Criminal charges were never filed, and Stevens is suing Webb and the NYPD for failing to properly investigate the crash. It's a heartbreaking story:

#accident investigation squad
#AIS
#Clara Heyworth
#cyclists
#ray deter
#original
Do you know the scoop? Comment below or Send us a Tip