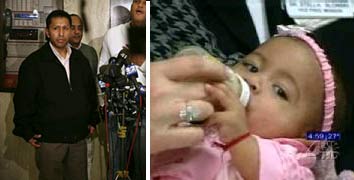 After the city was moved by the story of a baby abandoned in the backseat of a livery cab and how the driver dropped off the baby at a fire house, prompting the police and media to look for the baby's relatives, it turns out the livery cab driver was involved in the abandonment scheme. Driver Klever Sailema was arrested today, as were another man and woman. Oh, no.

According to the police, "Sailema was part of a scheme by an overwhelmed Bronx family to abandon the child, who had been born to a teenage girl." Sailema, who had "agreed to help them turn the child over to the city," was charged with filing a false police report. The Daily News reports the baby was born to a 14-year-old girl, and that the sister of the baby's father confessed to plotting the scheme last night. Maria Siavichay, 21, was charged with child endangerment while Marcelo Vinansaca, 24, (it's unclear what relation he is to Siavichiy) was charged with giving false information to the police.

On Thursday, Sailema had claimed he picked up a man and the six-month old baby in Queens, but the man fled after claiming he needed to make a call on a payphone. His taxi union said it would reward him with a $300 thank you and the city Taxi and Limousine Commission hailed his actions, saying he would be commended this month. Sailema even helped the police create a sketch of the man who allegedly ran off. 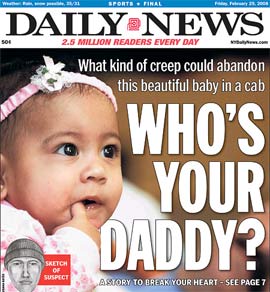 The local media showed images of the adorable baby as much as possible, in hopes to helping the police identify relatives. Police Commissioner Ray Kelly pleaded with New Yorkers yesterday, holding up a photo of the child and saying, "It's a beautiful baby. The baby is in very good health, so anyone with information please give us a call." The NY Times has a brief interview with Sailema in today's paper, his imaginary fare "told me the mother left the baby. He said, ‘I can’t take care of my baby.'" and that he wondered "Gee, what do I do now?” after the fare didn't return.

The baby, named Lourdes by the hospital, is still in custody of ACS. And while it may be little known to people in desperate situations, NY State has an safe haven law: "Under the Abandoned Infant Protection Act, parents, guardians, or other legally responsible persons who are unable to care for their newborn infants may anonymously and safely leave their infant in the care of a responsible person at a hospital, police station, fire station or a responsible person at another safe location."