With the recovery of the second body from Friday night's tragic boat crash on the Hudson River, more charges are expected against the boat's driver. Jojo John had been charged with one count of vehicular manslaughter after the body of bride-to-be Lindsey Stewart was found on Saturday, as well as three counts of vehicular assault. 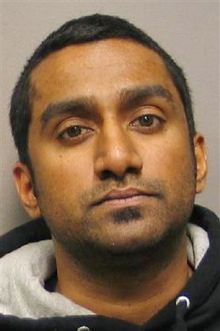 Stewart, fiance Brian Bond, John, best man Mark Lennon and a few other friends were enjoying a ride on the six-passenger Stingray when the boat hit one of the construction barges for the Tappan Zee Bridge. Stewart's and Lennon's bodies were missing until search teams found them on Saturday and Sunday. Their bodies did not have life jackets; only two of the four survivors were wearing life jackets.

Authorities suspect that John may have been intoxicated and have held him on $250,000 bail. (NY State officials say that the barge was properly lit, but will be adding more lights out of caution.) The Journal News reports that John has previous drug-related arrests: "John was charged with drug possession, a misdemeanor, in 2009 and drug-related conspiracy, a felony, in 2010, Sheriff’s Department said. It was unclear where in Rockland he was charged. John was sentenced to community service and probation following the charges. It was not immediately clear if he was still serving probation."

A friend told the Post, "He’s pretty messed up right now. He knows he’s in trouble with all the charges, but right now he’s more devastated that his friends are dead."

Stewart and Bond were supposed to be married on August 10. Mitchell Turk, a friend of the Bond family, told the AP that he visited the family, "It's sad and quiet there, long faces. They're trying to carry on, doing as well as can be expected. I'm a little shaken. When you think of what they've lost, a daughter-in-law, Brian injured, it's tough." His daughter, Sheryl Palacio, also knows Bond, "He's an outstanding teacher, a wonderful, kind, respectful man," and said that Lennon and John were his best friends. She said John was "a good man, happy and loving" and "would never, ever want to put his friends in danger."