John Kelly is lucky. Lucky that he wasn't seriously injured when a van struck him (twice) while he was riding his bike home in Astoria, lucky that the van's windshield wipers didn't give out as he clung to them while the vehicle kept moving, and lucky that at least four people witnessed the whole thing. "I'm just astounded," Kelly says. "[The driver] just stared at me the whole time I was hanging on the hood and shouting. He just had this angry look on his face. It was really disconcerting."

One of the witnesses to the hit-and-run, Michelle Islas, says she was walking with a friend down 35th Street at 30th Avenue on Saturday afternoon when she saw the collision. "We see a man on a bike, and a van hits him once on the side—he tries to keep his balance, but the van kept going into the bike lane and hit him again. He was holding on to the windshield wipers and screaming but the van kept going."

Liane Gustafson heard screaming from her apartment on 35th Street and looked out her window. "People on the street were screaming at the guy in a navy blue van, telling him to stop. One man ran over and started banging on the van's window, and [Kelly] is just holding onto the van, until he managed to get out of the way, and the van ran over his bike and sped off."

Kelly says that as he approached a red light at 30th Avenue at a low rate of speed, the van starting veering into the bike lane. "I looked at the guy and said, 'Don't drive into the bike lane.' And I proceeded to move forward, and he did too, and that was when he hit me the first time with the front panel of the van." Kelly says that when the van struck him again, it was "moving slowly, but fast enough that I couldn't get off of it." As he clung to the front of the van, he speculated that the driver "thought I could somehow escape from this. I was yelling for him to stop, and just shouting, but he had to slow down because there was a car in front of us and he would crush me."

Instead the van crushed Kelly's $1,700 bike, and gave him a few scratches. The police arrived after Islas called 911, and interviewed Gustafson, one of the four witnesses who offered to come forward. "[The police] were very matter-of-fact, very quick. It was my understanding that they would pursue the case and try and catch this guy."

Kelly said he was told it wouldn't be worth their time: "At the end of the questioning, they said that it's not likely that they're gonna be able to get this guy, because the company that owns the this van may or may not give up this driver; they could say it was stolen. So the police said my best option was to try and sue the owner of the van to pay for the property damage, but that may cost more than the bike is worth." 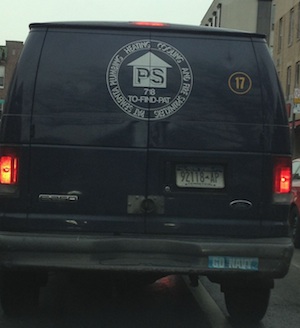 The company listed on the back of the van in a photo taken by one of the witnesses is Pat Sementa Plumbing Heating & Cooling. A woman answering the phone at the Bronx office said she was unaware of any hit and run, but that a manager would return our call.

"Leaving the scene of a crash causing property damage is an infraction. Leaving the scene of a crash causing even just scrapes is a Class B Misdemeanor," attorney Steve Vaccaro writes in an email. Vaccaro reviewed the accident report officers filled out for Kelly's case and says that police noted two contributing factors to the crash: "Improper Passing or Lane Usage" and "Aggressive Driving/Road Rage."

"If the cops concluded that there was 'road rage' involved, then there could be a more serious charge for sure, such as third degree assault," Vaccaro notes. "If the driver actually failed to stop accelerating when the cyclist was up on his hood, that definitely deserves consideration for third degree assault and possibly reckless endangerment."

Islas, a 16-year-old student, said this wasn't her first encounter with reckless drivers: she was hit by a car several years ago, but the car stopped to make sure she wasn't injured. A friend was later hit and hospitalized, and the car fled the scene. "They said her messenger bag saved her, because she was carrying it on the side where she hit the ground."

Islas said that she had seen more hit and runs crop up on the news recently. "Lately it's been happening a lot, it's become very frequent, with the Jewish family that was killed by that driver who ran away—I think the government and the police should be doing more about it, these hit and runs should be taken a lot more seriously."

She added, "John was lucky. He was really lucky. He really was."

#astoria
#bike lanes
#cycling
#cyclists
#hit and run
#queens
#road rage
#original
Do you know the scoop? Comment below or Send us a Tip