Driver Fatally Ejected From Car As It Crashes Off Belt Parkway

A 27-year-old driver died after he was ejected from a car during a high-speed crash on the Belt Parkway in Brooklyn around 2 a.m. this morning. According to the NYPD, the unnamed driver of a 2009 Infinity M-35X was speeding east near Exit 13 when he hit a guardrail on the Mill Basin Bridge separating the east and westbound lanes. After hitting the guardrail, the car careened across three lanes of east-bound traffic, hitting a light pole and crashing through a guardrail on the other side of the highway.

Police say the driver was ejected from the vehicle and landed on the roadway, while the car crashed off the elevated parkway, plunging to the sandy ground below. The driver was pronounced dead at the scene, and the investigation is ongoing. 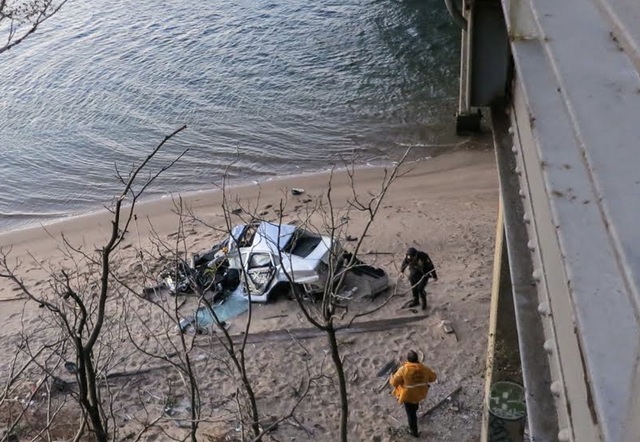 CBS 2 reports that the crash caused heavy traffic delays on the Belt Parkway in Brooklyn earlier this morning, with the eastbound side of the parkway between exits 11 and 13 entirely closed down for a time. All lanes have since reopened.

Extra Extra: The guy who invented the modern bulletproof vest shot himself in the chest ... a lot

Because he was also a salesman, here are your end-of-day links: Astoria pool hall lives to see another day, Eric Adams' favorite restaurateurs owe a lot of back taxes, the best song of the year according to Pitchfork, and more.