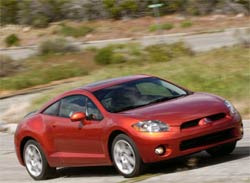 After searching for the driver of a red Mitsubishi Eclipse that fatally ran over 7-year-old Christian Aceteopan in Brooklyn on Sunday afternoon, the police arrested Queens resident Jose Vargas for leaving the scene of an accident. Vargas was arraigned last night with bail set at $300,000; the NY Times notes that it was "$50,000 more than the assistant prosecutor...had requested."

Vargas' license was also suspended. Witnesses had said that the Eclipse driver had hit the child, who was crossing Bleecker Street between Central and Wilson Avenues; the driver stopped, but then kept going. Then another car, a Toyota SUV, ran over Christian, but the driver stayed behind and was not charged.

Vargas' lawyer contended that his client was innocent, saying, "Mr. Vargas has never fled from anything in his life. Why should he?" Lawyer Salvador Delgado told the Times his client's car had no damage and that he had stopped out of curiosity.

Christian's mother, Margarita Aceteopan, told the Post, "They can't bring him back to me. I want them to bring back my Christian." The Daily News reports that the single mother who also has an 8-year-old is looking for a way to bring her son's body back to Puebla, Mexico for the burial. Christian would have started the first grade at PS 71 today.