Driver Blames GPS for His Car's Collision with Train 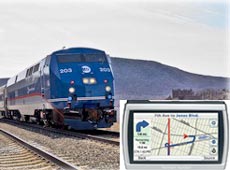 On Monday, a man driving in Bedford Hills made a right turn, just like his GPS told him. Or did it--because he drove onto Metro-North train tracks and into the path of a train. Luckily Jose Silva and his passengers got out before he was hit, but this is the second time a driver has blamed GPS for making them drive onto the tracks.

The car's GPS said to make a right, referring to a right up the road, but Silva and the other January driver made immediate rights. The police said there were a number of warning signs posted on the roadway--as well as railroad crossing gates. The MTA police told WCBS 2, "If he was paying attention to the road it might not have happened."

Metro-North was not very happy, since the crash caused hours of delays. Spokeswoman Marjorie Anders wondered, "You don't turn onto train tracks. Even if there are little voices in your head telling you to do so. If the GPS told you to drive off a cliff, would you drive off a cliff?" Well, if you're Michael Scott...

Silva was given summons for driving onto the tracks and not obeying signs.

#Bedford Hills
#crash
#gps
#metro north
#train tracks
Do you know the scoop? Comment below or Send us a Tip