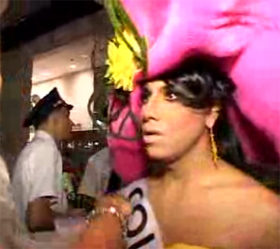 A fierce group of drag queens are suing Rockefeller Center, alleging that security guards tried to stop them from taking photos outside in the plaza and ordered them to disperse. WCBS reports that the festively dressed transvestites were having a gay old time taking photos of themselves when security guards approached and said they were not allowed to take pictures in the plaza.

A YouTube video (also after the jump) shows the chaotic scene, with lots of yelling in Spanish and sour-faced security personal trying to shoo away the increasingly incensed drag queens. One of them tells the Post, “They wouldn't give us a reason for why we couldn't be there, but we're pretty sure it's because of how we were dressed.” After a lot of booing, the group was finally allowed to stay, but they’ve filed discrimination complaints with the state Division of Human Rights.