Downturn Means Layoffs All Around 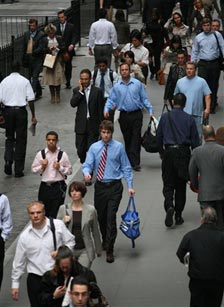 Today, the NY Times looks at how layoffs are beginning at a "broad array of businesses across the New York region." Basically, it distills everything you've been hearing, thinking and fearing.

One data point: For the week ending October 11, "New York led all states with an increase of 5,224 first-time unemployment claims." The job reductions are not only at Wall Street firms, but at law firms, publishing companies, digital media, construction, and more. Conde Nast just announced a 5% cut of magazine staffs, which, the Observer reports, "will affect every title, including the company's most successful."

Another data point: For the first nine month of 2008, the Times reports "60,000 New York City residents collected unemployment checks"--an increase of 7,000 (13%) over the same period in 2007. The CEO of Alleycorp, Kevin Ryan, says of online businesses, "Already, a lot of conversations about consolidation are happening," and believes more layoffs--in advertising and retail--"will come in January."

The Times has an interesting graphic showing unemployment, 2007 vs 2008, in different industries. And over the weekend, the AP had a story about Wall Street workers leaving the city for smaller firms in places like " Florida, Chicago, Milwaukee, Virginia and Asia." A headhunter said, "I'm noticing that people are willing to work places that they would have hung up on me if I had suggested it a year ago."

By
Samantha Max
‘We need to be given hope’: What Puerto Rican and Latino political power means in New York City
By
Brigid Bergin
Federal judge blocks NY gun ban in Times Square, subways
By
Jon Campbell
10 years after Hurricane Sandy hit NYC, memories come flooding back
By
Enrico Denard
and
George Bodarky
Get the news New Yorkers need in your inbox