"These protesters are destroying our neighborhood. This 'good neighbor' policy? Good neighbors pay rent!" A smattering of applause was swallowed by a chorus of boos after 26-year-old Frank Calvosa spoke at last night's CB 1 Quality of Life Committee meeting. Calvosa was one of around ten people who spoke condemning Occupy Wall Street's presence in Lower Manhattan, and they were outnumbered. Resident Garrett McConnell took the mic shortly after: "Who are these people who live in Manhattan expecting peace and quiet? New York is loud, dirty, and fabulous!"

"Hipster Cop" was MIA, but over a hundred people, including Councilmember Margaret Chin, Manhattan Borough President Scott Stringer and State Senator Daniel Squadron packed the room at 250 Broadway to discuss the drumming that occurs at the southwestern corner of Zuccotti Park. All the elected officials hedged their bets, professing support for the protests but stressing that "people need a good night's sleep." 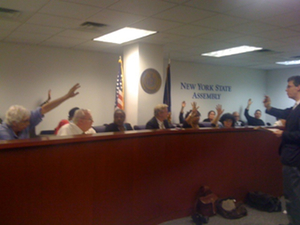 Boardmember Diane Lapson had many of her peers nodding their heads when she stressed "both sides need to chill out. I have lived here since 1975 and have heard nothing but noise, mostly from the rich real estate types taking away low-income housing." As for the protesters, they should realize that "people need their sleep. If my daughter was drumming in my apartment for 14 hours, I'd murder her."

Last week the protesters ratified a Good Neighbor Policy that permitted the drumming for two hours between 11 a.m. and 5 p.m., a rule that proved difficult to enforce. As the committee confirmed that the drumming would in fact be limited to two hours and enforced by the protesters' own volunteer security team, a woman who identified herself as "a drummer" repeatedly shouted "four!" A protester tugged on her sleeve and scolded her, but she continued her periodic outbursts: "It's the drilling that's more noisy!" Occupy Wall Street's current sanitation manager at the park, Max Hodes, told us, "I heard she works for the Huffington Post."

As the meeting wore on, noise complaints gave way to stories of people defecating and urinating in public places and one woman claimed that "two protesters exposed their genitalia to me. Something must be done." Area man Gordon Crovitz, former publisher of The Wall Street Journal, took the mic to say, "Occupations by definition are un-democratic, and these people are taking our space. And they talk about democracy. Democracies are supposed to be accountable. These protesters need to be accountable for what goes down there."

The omnipresent police barricades that keep the neighborhood congested was an issue that both sides could agree on. Vincent Alessi, part-owner of Bobby Van's Steakhouse on Broad Street blamed them for a slump in customers. "Business is down 15%, these barricades need to be taken down. That's the NYPD. The protesters are peaceful," Alessi said. Farrell McManus uttered possibly the biggest applause line of the night when he said, "I'm just a middle-aged, pudgy white guy. I'm not cool enough to be an occupier. But we need to be complaining about these barricades to our billionaire mayor! Not these guys."

All of the complaints yielded an amendment to a noise resolution that asked the NYPD to removed all nonessential barricades. Two hours later, the committee passed the resolution with only one objection and one abstention, ahead of next Tuesday's meeting of the entire CB 1. "It's a big relief," Hodes said. "We can't even call it a victory, because there wasn't even much of a battle. People understand that we have to share the work together as a community."