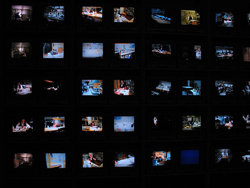 Thousands of cameras, license plate readers, radiation detectors, and street barriers to be installed downtown won't just observe and record the activity of vehicles and individuals, but will be programmed to sound alarms if they spot suspicious activity. The Lower Manhattan Security Initiative, patterned after London's Ring of Steel surveillance system, will place 3,000 cameras below Canal St., install 100 license plate readers at bridges and tunnels and around downtown, locate an undisclosed number of radiation detectors, and embed automatic traffic barriers in city streets. The system will be programmed to detect suspicious behavior.

An article in amNewYork reports that the system will be able recognize a car that circles a "sensitive" location several times and sound an alarm for police or security officers to check it out; so lost or confused tourists, beware! Also, if a package is left in any particular location for more than a prescribed time, a signal will be sent warning of its presence. Unlike standard security cameras that passively record scenes for review, the planned surveillance network will stream video in real time to a police command center and monitor for threats as they are encountered.

Critics of the system say that such a comprehensive network poses a threat to privacy, but courts have generally ruled that there is no expectation of privacy on public streets. The article in amNewYork quotes a London security official who said that even such a thorough system is little help when dealing with suicide bombers, like the ones who bombed that city's transit system in 2005.

The Lower Manhattan Security Initiative will be funded two-thirds by private businesses in the area looking to avert losses similar to those encountered with the 9/11 attacks. The city and federal funding will account for the rest of the $90 million project. 1,000 cameras are scheduled to be in place by next September with another 1,000 networked in the following six months. All 3,000 cameras are scheduled to be up and running by September 2009.