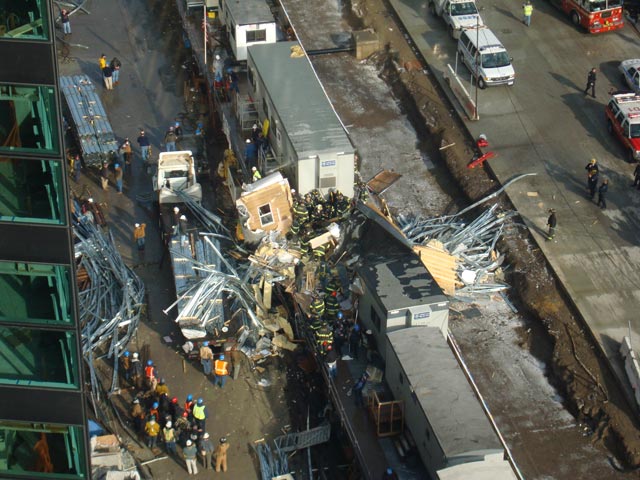 Architect Robert Woo is hospitalized but in stable condition today after the construction trailer he was working in was crushed by a load of falling steel that a crane dropped. The crane was elevating the steel at the site of the new Goldman Sachs building at the World Trade Center. The accident occurred yesterday morning when a nylon sling snapped and seven tons of steel fell 25 stories. Woo was the only person injured in the incident at 200 Vesey St. He was pulled from the wrecked trailer dazed and bleeding from his mouth. 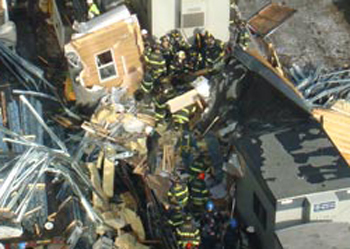 Woo works for Adamson Associates Architects of Ontario and lives on West 89th St. in Manhattan. A construction worker who ran to the scene said he found the architect still seated in his desk chair, which had tipped over when a quarter of the 14,000 pounds of steel studs ripped through the trailer. The construction of the 43-story Goldman Sachs building is being done by Tishman Construction Corp. as the general contractor and is currently almost three quarters of its planned height.

A reader who works at 3 World Financial Center said she had co-workers who witnessed the accident and managed to snap this picture from the 14th floor overlooking the scene. The Dept. of Buildings issued a stop work order to Tishman and cited the company for a number of immediate violations. It did say that the sling that broke is designed to hold more than the seven tons it was hoisting.