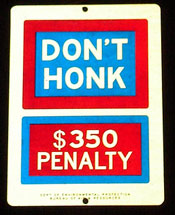 Downtown Manhattan residents have heard enough from honking cabs, and one Community Board is asking the Taxi & Limousine Commission to do something about the racket. Community Board 3, which represents the area of Manhattan containing the East Village, Lower East Side, and Chinatown, voted this week to formally request that the T&LC require devices to be installed in cabs that will visually identify them as horn abusers.

Currently, police have to audibly witness a cab honking his horn in order to enforce noise pollution rules. A "tattletale" light will serve as a sort of Scarlet H, revealing cab drivers who have been leaning on their horns. There are other creative ideas to curb cab cacophony around town, as mentioned in the New York Post:

Alright, that last one isn't an actual suggestion. No doubt some residents would approve though. "What Times Square is to the eyes, Ludlow Street is to the ears," musician Avram Fefer told the Post. The T&LC promised it would consider the issue as part of its "Taxi for Tomorrow" project.

#cabs
#cb3
#honk
#lights
#Lower East Side
#manhattan
#noise pollution
#tlc
Do you know the scoop? Comment below or Send us a Tip