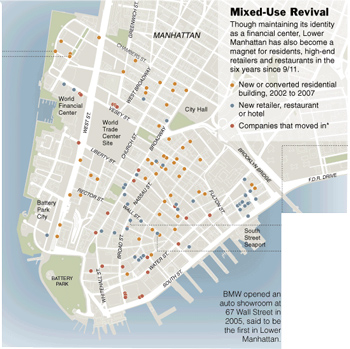 Six years ago, the prospects for downtown Manhattan seemed uniformly bleak. A persistent fire that burned for months amidst the wreckage of the World Trade Center filled the air with an acrid smell that was a constant reminder of 9/11. Restaurants and shops shuttered for lack of business. And many firms considered moving across the river, fearing that every tower in the financial district had a virtual target painted on its facade. The New York Times has an article today, however, that not only has the area below Chambers St. recovered to 2001 levels, the neighborhoods of downtown Manhattan are thriving like they haven't in decades, if not centuries.

Mixed use development has reinvigorated the southernmost tip of Manhattan Island, with people living, shopping, dining, and working without having to travel great distances. In many ways, the current state of downtown is reminiscent of the early years of Manhattan's settlement by the Dutch and conquest by the English, when the City ended at Wall St. and merchants, traders, craftsman, and those that catered to them lived and worked in mixed use communities, centuries before the term would ever be coined.

Despite the slow pace of reconstruction at ground zero, the area below Chambers Street is humming with activity, much of it designed to appeal to the well-heeled professionals who are transforming the neighborhood. Already, it has added hundreds of condominium units and hotel rooms, a thriving restaurant row, a private school charging $27,000 a year, a free wireless Internet service, a BMW dealership and an Hermès boutique.

A Tiffany store will be appearing in the neighborhood and grocery stores are planned for the area. 6,000 apartments have been built in the last four years and another 5,000 are scheduled to be built by developers. The downside is that even as business booms, skyrocketing rents are pushing longtime businesses and residents out. The Times talked to a salon owner, who opened a second location and will soon be open seven days a week thanks to the neighborhood's revival, but is going to have to find a new place to live because the going rate of $4,000 for a two-bedroom apartment is beyond her price range. It seems like the only thing not being built at a boomtown pace these days is the World Trade Center itself.