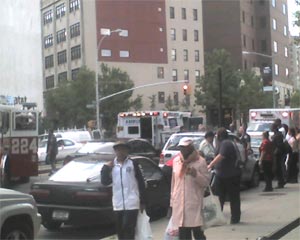 Yesterday afternoon, an 88-year-old man crossing Court Street in downtown Brooklyn was hit by a car. The man was on the car's hood/windshield and witnesses told police the driver swerved for a block to shake the victim off.

One witness told the Daily News, "Half his body was inside the car and the other half was hanging outside the passenger seat... [The driver] didn't show no remorse. He was just trying to get rid of him. He was swerving between two lanes like a snake."

The victim was taken to Bellevue Hospital, where he is in critical condition. The police are searching for the driver and car. Photograph taken by reader Dov, who wrote the area was closed off by police investigating the scene hours after the 3:40 p.m. incident.