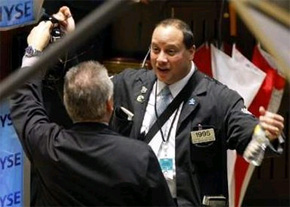 The Dow Jones ended the day at 9,065—up 889 points—as, the NY Times reports, "investors began looking for bargains among beaten down stocks." Plus, there's hope that the Federal Reserve will once again cut the key rate.

The day started out with the Dow going up 200 points, even hitting 300 points above the open, but then those gains were lost after a report that American consumer confidence is at a record low.

But in the last two hours of trading, the stock started to climb up and by the end, the Dow was up 10.88%, the S&P 500 was up 10.79%, and Nasdaq up 9.53%. An equity market strategist told Bloomberg News, "Anyone who has a long-term view and looks at earnings multiples and inflation will say it's a cheap moment to buy stocks." Still, before today, Bloomberg News also points out that $12 trillion in equities' market value was lost.