Double-Decker MTA Buses May Roll Out in the Future 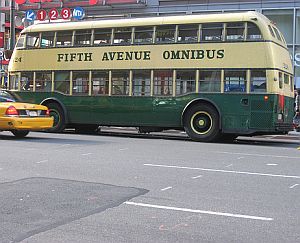 New York City bus riders could soon be commuting just like the tourists if the MTA follows through on their tall talk about bringing double-decker buses back into circulation. The Post reports that NYC Transit President Howard Roberts floated the idea before the MTA board yesterday; the double-deckers are appealing because they fit more passengers and, according to transit officials, actually cost less to maintain.

And if the dream becomes reality, the city won’t have to worry about Londoners accusing New Yorkers of biting their style – because back before the fifties the city had some of their own double-deckers rolling around, and eight of them were put into transit service in the ‘70s, too (pictured). And besides, London doesn’t own the double-decker concept – the buses are popular all over the world in cities like Hong Kong and Berlin.

The Post points out that some double-decker buses can carry as many as 83 passengers, compared to the 62 seats available to passengers on the jointed, accordion-style New Flyer buses in use today. And in other bus news, the MTA has been testing out a 60-foot low-emission bus on the M101 route made by Mercedes-Benz. It’s one sweet ride – lower to the ground, seats 48, and each passenger gets a flute of Veuve Clicquot and the current issue of Elite Traveler.