Two weeks after the vigil for Jean Chambers, the fourth pedestrian to be killed on the UWS this year, the Department of Transportation presented a proposal for a redesign of West End Avenue. City Council Member Helen Rosenthal opened the Thursday night gathering saying, "We are going to take our pain and turn it into a plan, and what we’re doing tonight is exactly that."

DOT Commissioner Polly Trottenberg attended, a strong signifier of the gravity of the meeting. Also present was Borough president Gale Brewer, Assemblyman Danny O’Donnell and representatives from the State Senator and Mayor’s office.

The sign-in sheets at the packed auditorium of P.S.811 were filled with West End addresses. Neighbors hugged and waved hello’s as DOT’s Josh Benson presented to a room of over a hundred people. 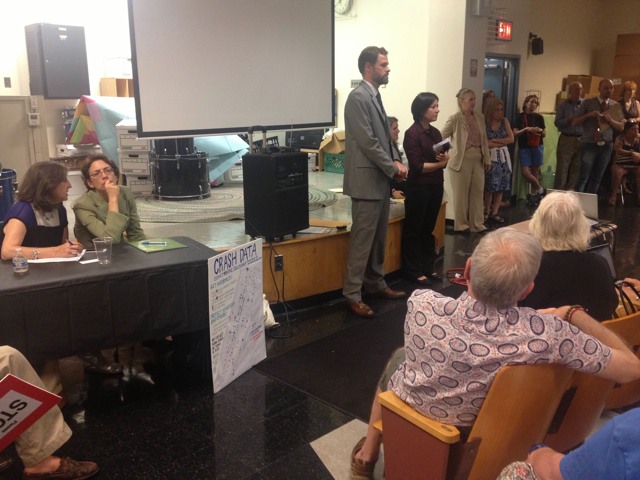 The crux of the plan is a four lane-to-three lane conversion of West End Avenue from 72nd Street to 107th Street. Currently, West End Ave. has two lanes each going North and South, with two lanes for parking on either side (six lanes total). The proposed plan would change West End from four lanes, to three: a north lane, a south lane, a middle lane for left turns and wider parking lanes on either side (five lanes total).

Benson described the current road situation as "chaotic" with pressure on turners to make fast lefts, because of honking traffic behind them. The turn lanes would allow safe and focused turns, while through-traffic will no longer swerve around turners. The wider parking lanes accommodate inevitable double parking. The lanes aren’t big enough to "encourage" double parking, Benson said, but allows for cars traveling north and south to comfortably drive past it.

The DOT also wants to eliminate two left turns: the northbound left onto 97th Street (where Cooper Stock was killed) and the southbound West End onto 95th (where Jean Chambers was fatally struck). The space created will be used to install four pedestrian islands at the north and south crosswalks at 95th Street and 97th Streets. The islands will provide a mid-street refuge for pedestrians and a way to force drivers to make more-careful left turns. They can’t make sharp or fast turns around the islands, the turns will be wider and slower.

However, the plan does not include any curb extensions/bumpouts, which is what the DOT added to West End at 70th Street, which has seen five pedestrians being hit by cars since 2012.

Benson reminded the audience of the recently installed pedestrian lead intervals at 95th, 96th and 97th Streets that range from seven- to nine- second head-starts for walkers.

After the presentation, a two-hour public comment session began, revealing tentative acceptance of the proposal. Community members were unsure if the plan was broad enough to prevent future fatalities. Chris Henry, who lives at W 99th and West End thinks that the traffic islands are too reactive to the recent tragedies.

“The exact concern of tight turns and speed during turns apply throughout the entire corridor,” he said. “Something needs to be at the edge of the center line at every intersection. Those problems will repeat themselves, and we’re going to have the same problems elsewhere. Don’t just put them at 95th and 97th.”

Safety questions were raised about intersections including 72nd Street, 79th Street and 96th Street, and any street associated with entering and exiting the Henry Hudson parkway. Benson stressed that the four-to-three conversion would be applied to all these areas but, for now, there are no plans for islands at those locations.

Mary Beth Kelly, a founding member of Families for Safe Streets, spoke on behalf of Dana Lerner, the mother of nine-year-old Cooper Stock, who was killed On January 10. Kelly's husband, Dr. Henry Nacht, was killed by a NYPD tow truck while they were biking on the West Side bike path in 2006.

"We need to wake up from the nightmare," she said. "Not just make a change here, and a change there. I applaud these changes and I think that they’re wonderful, but we need a big vision… we’ll have death here, then a response. A death somewhere else, then a response."

Dan Zweig, co-chair of the CB7 Transportation Committee said the plan is not as piecemeal as residents think.

"A plan like this, doesn’t start out perfect," Zweig said. "You can only do so much at one time. And this really addresses the whole length of West End. It really is a change that’s more global than what had been asked for. "

He said that the current plan for islands is just a starting point.

"Islands can always be put in," he said. "Maybe we do need more islands. But we’ve got something to change now and change the traffic patterns." 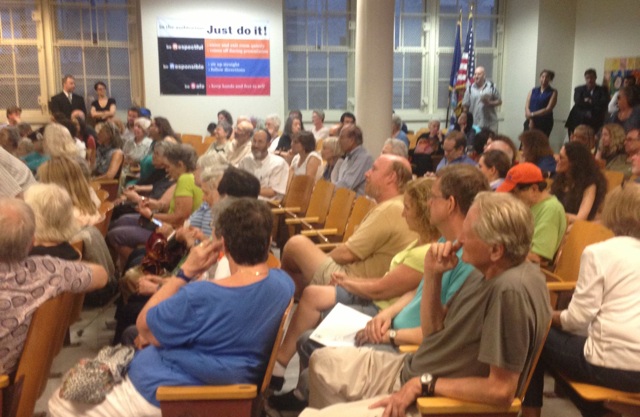 The public takes in the DOT's proposed changes (Shayla Love/Gothamist)

Commenters also worried about traffic as a result of the lane narrowing, but Benson said that through traffic data analysis, DOT banned turns where they saw infrequent activity. As far as the lane decline from four to three, Benson said that the addition of the turn lane will create one consistently moving through-lane.

The NYPD was not present to answer questions regarding enforcement. Even though Assemblyman O’Donnell announced that the new speed limit of 25 mph was approved by Governor Cuomo, residents wanted assurance that the new speed, running red lights, and limiting of commercial traffic would be strictly enforced along with the new road layouts. There was a call for a widespread education campaign to alert all drivers of the new road rules.

Three hours later, as attendees trickled out of the room, Rosenthal said she was thrilled.

"I’m so impressed. We had hundreds of West Siders here tonight, most of whom got to make a comment," she said. "I really thought that DOT was listening and responding to every single comment."

There will be another town hall-style meeting on August 12, for those who couldn’t make it last night, and a similar question and comment session with DOT. The proposal will be voted on at the full-board CB7 meeting on September 2, and Rosenthal is confident that it will go through. As promised at the vigil, plans will go into effect right away. The streets will be ground up in August, repaving and island installation done in September and October, and street painting by November.

"Be careful on your walks home," a voice called out to the crowd as it dispersed.