DOT To Tourists: Quit Putting Love Locks & Other Crap On The Brooklyn Bridge The Department of Transportation announced today that it will be cracking down on locks and other items left on the Brooklyn Bridge as signs of enduring love. And violators will have to pay!

The placing of love locks, a tradition popularized by an Italian book and movie, has spread rapidly through major cities and made its way to New York's own Brooklyn Bridge. Visitors have taken to attaching inscribed padlocks to the bridge gratings, lampposts, and overhead wires—pretty much anywhere they'll fit—to immortalize their trip to New York City and their undying love for each other. Signs on the bridge now warn specifically against locks, so tourists have begun to get creative: headphones, hairbands, string, and other items have all sprung up in their place. 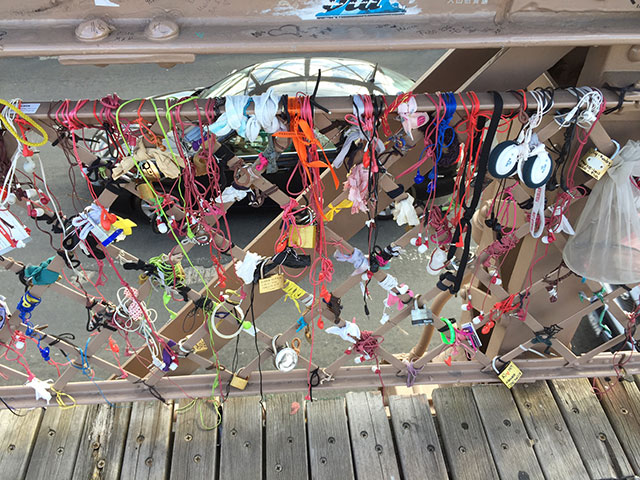 The phenomenon gained traction in 2013 when the DOT started counting the number of locks removed each year—nearly 34,000 according to DOT Commissioner Polly Trottenberg. She said the removal is time-consuming, requiring DOT crews to traverse the bridge a few times a week to remove unwanted detritus, and has cost the city $120,000 this year alone.

But what seems like a "harmless romantic gesture," according to Trottenberg, has now become a safety issue. Trottenberg held up an overhead light support dangling with headphones and locks that had snapped from the added weight and fallen onto the roadway. 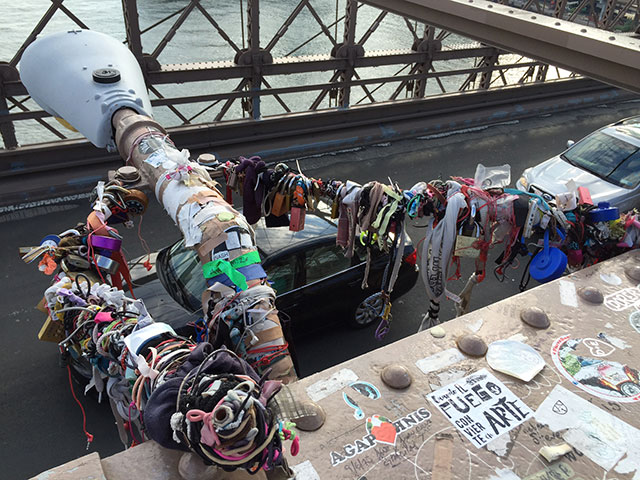 Nearly 60 million tourists visit the city each year, with the Brooklyn Bridge high on their list of landmarks to hit. The recent headphone phenomenon stems from tourists using guide group headphones to mark their visit to the iconic bridge. The DOT has recently contacted tour companies to inform them of the problem and to ask for help in curbing the behavior.

Four million people traverse the bridge annually, and many use its picturesque image as the backdrop for their wedding or engagement photos—a handful were posing during my trek across the bridge. DOT workers with bolt cutters dutifully clipped locks into buckets as I walked by. They claimed they had been there since nearly 6 a.m. and that they could barely keep up with the influx of new debris each morning.

With the help of former Brooklyn Borough President Marty Markowitz (the genius behind the 'Fuhgeddaboutit' signs), the DOT has decided to post new "No Locks, Yes Lox, Fine $100" and "Yes Love, No Locks, Fine $100" signs on the bridge to deter tourists.

#brooklyn bridge
#department of transportation
#love locks
#marty markowtiz
#polly trottenberg
#original
Do you know the scoop? Comment below or Send us a Tip