If you want to get something done in this city, create a heavily produced video featuring an adorable kid asking for what you want.

Nine-year-old Lucas Maxwell and his 14-year-old brother Zachary created the mini movie "Corner of Death", which outlines the dangers they face while walking from their school P.S.130 to the downtown 6 train at the corner of Kenmare Street and Lafayette Street, and put it online on May 31st. A little over two months later, the DOT unveiled new safety measures at that Soho intersection while simultaneously releasing the findings from their study of left turns. Can we get these kids to make a video demanding air conditioned subway platforms?

"I get a lot of letters in this job, actually thousands of them and a lot of tweets and emails and other things, but I rarely get a 'Dear Polly Trottenberg' video made specially for me," Trottenberg said at a press conference this morning. "And he [Maxwell] really helped to underscore our message today, the danger of left turns."

Safety improvements to the intersection include a 12-second head start for pedestrians crossing Lafayette Street, replacing the green light on westbound Kenmare Street with a flashing yellow light, and a delineator between left and right lanes on Kenmare Street. This particular intersection has had 11 pedestrian injuries and one cyclist injury in the past five years, putting it in the top 1 percent of NYC intersections for left turn crashes. 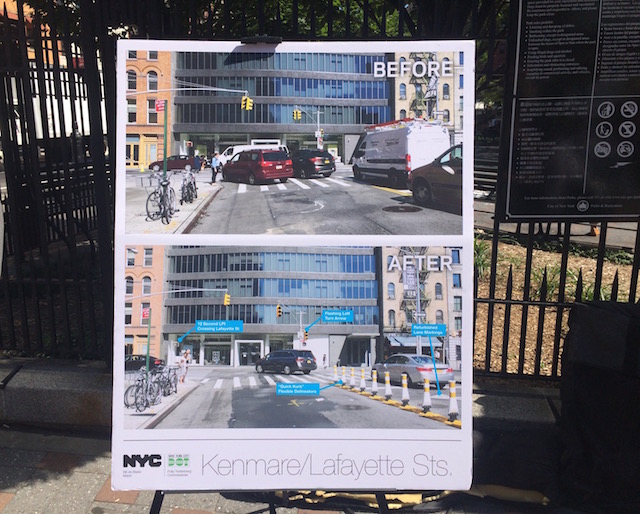 The DOT evaluated 1,105 crash reports between 2009 and 2013. From the data they found that "pedestrians and bicyclists are killed or severely injured by a left-turning vehicle at over three times the rate (19%) of pedestrians and bicyclists killed or severely injured by a right-turning vehicle (6%)." Notably, 55 percent are injured or killed by a car going straight ahead.

And after looking at 478 intersections with new left-turn safety measures, the study found that the left turn restrictions reduced injuries by 41 percent.

The study also found that the elderly are more at risk to injuries from left-turning vehicles, with the median age being 67. The majority of these accidents occur when a minor, narrow street is turning left onto a major street, such as at the intersection of Kenmare and Lafayette.

The next phase in the left turn plan is the 100-intersection pilot initiative, which will test new left-turn designs at the intersections with the most injuries and fatalities, in order of severity. The program is at its halfway point and is expected to finish by the end of the summer. The majority of these intersections are located in Manhattan.

"A lot of the treatments will be here [in Manhattan]," said Rob Viola, director of safety, policy and research at DOT today. "It's where the pedestrians are and the turning traffic is."

#dot
#left hook
#soho
#traffic
#vision zero
#original
Do you know the scoop? Comment below or Send us a Tip
A new Gothamist is coming! We’ve moved comments over to our beta site. Click here to join the conversation and get a preview of our new website.