Cyclists traveling in Sunset Park won’t have to wait too much longer for a protected bike lane on 4th Avenue. On Wednesday, the city announced that they will finish the bulk of the work on the two-way bike lane between 61st Street and 1st Street in “the fall of 2019.”

The city is expediting its work on 4th Avenue as part of Mayor Bill de Blasio’s “Green Wave” plan to make cycling safer after the sharp increase in cycling deaths, but the push for the Sunset Park bike lane came much earlier.

“That call [for the lane] came from the community, and that’s when good work started to happen,” said Brooklyn Councilmember Carlos Menchaca, who represents Sunset Park. Standing with Menchaca at a press conference announcing the bike lane’s expedited timeline were Councilmember Brad Lander, Rep. Nydia Velazquez, and Department of Transportation Commissioner Polly Trottenberg.

Out of 18 cyclists killed this year so far, 13 have died in Brooklyn. On July 29th, Em Samolewicz was fatally struck by a truck driver on 3rd Avenue in Sunset Park. Samolewicz was hit after she swerved to avoid an open car door.

A concrete barrier dividing the bikes from cars won’t be completed until next year. The stretch of bike lane between 1st Street and Atlantic Avenue is still “under development,” with no set timeline for completion. 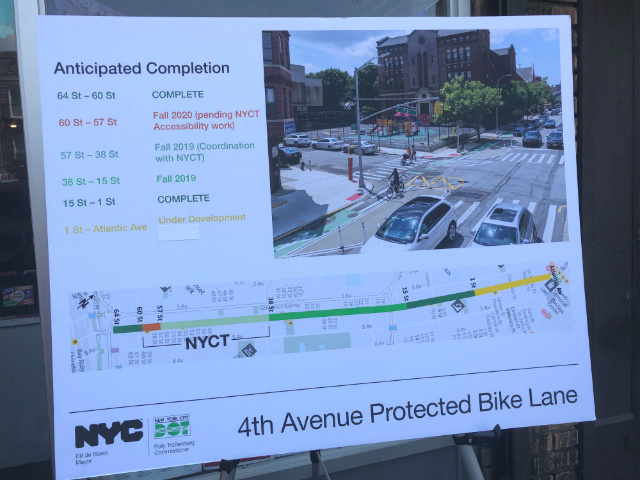 “You see some yellow, on the left side of this map,” said Council Member Brad Lander in reference to that portion. “It can’t stay yellow for very long because I don’t want to be standing at a vigil with you guys because somebody gets killed, because we didn’t move fast enough.”

Trottenberg told the crowd that in addition to the bike lane, the DOT has “done a lot of other safety improvements on this street.”

“Lowering the speed limit, speed cameras, really trying to think of 4th avenue as a neighborhood street. We are now going to be taking a deeper dive on 3rd avenue,” Trottenberg said.

Asked if the DOT had plans to expedite more bike lanes this year, Trottenberg pointedto the Green Wave Report. “This is basically our 10 year vision for creating a protected network. This is what we’re proposing to do in the next few years,” she said.

But part of the bike lane is in 👍 pic.twitter.com/a2DUednwEl

John Tomac, an illustrator from Bay Ridge, bikes four miles on this corridor to Prospect Park three times a week, often with his kids riding with him. Tomac said the 4th Avenue bike lane is needed, as cars often double park throughout the day.

“What’s nice about riding in protected lanes is just that it’s a lot less stressful,” Tomac told Gothamist. “It’s almost like bonding time with my son. We talk, and share a ride together without having to worry about any traffic.”

#bike lanes
#cycling
#cyclist fatality
#green wave
#sunset park
#vision zero
Do you know the scoop? Comment below or Send us a Tip