The Department of Transportation is planning to widen overflowing sidewalks on 7th Avenue between Penn Station and Times Square by next spring, according to a presentation [PDF] made Tuesday to Manhattan's Community Board 5 transportation committee. DOT believes the redesign will improve conditions for pedestrians in one of the city's most congested corridors.

The vision for 7th Avenue includes new 10-foot gravel sidewalk extensions on the west sidewalk between 33rd Street and 42nd Street, broken up intermittently with bus boarding islands. The new pedestrian space will replace a bus/parking lane. The plan would also convert the westernmost lane to a loading/parking lane during off-peak hours.

On southeast corners, where drivers turn left off of 7th Avenue, new curb extensions would reduce the turning lane from four lanes to two.

7th Avenue is a Vision Zero priority corridor, with 298 injuries between 34th and 42nd Streets between 2010 and 2014. Of the total injured, 138 were pedestrians, 12 of whom were severely injured.

The New York Times recently singled out 7th Avenue in midtown as a corridor with high sidewalk overflow. Car traffic on 7th Avenue, meanwhile, is below capacity, with excess road capacity "particularly during off-peak hours," according to DOT.

The DOT is also planning a car-free trial for the summer [PDF], temporarily closing two blocks along Broadway: between 39th and 40th Streets, and between 36th and 37th Streets. The city is planning to install temporary turf, moveable furniture, stone benches and artwork between June and August, according to a DOT presentation. The pilot will look something like this: 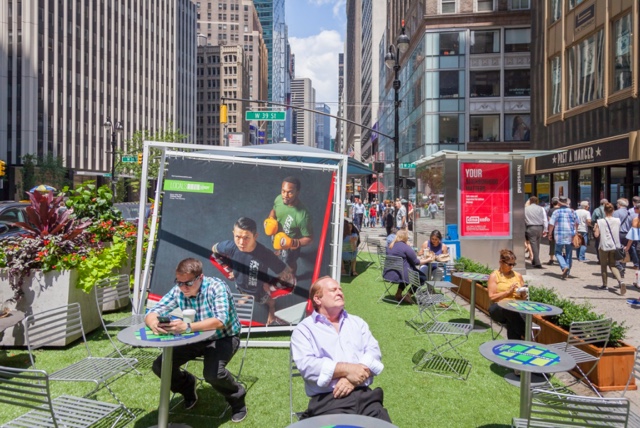 Streetsblog reports that The Garment District Alliance had initially hoped to close five Broadway blocks this summer, but scaled back due to lack of funding. Revenue from 12 food vendors on 39th Street will reportedly help cover the cost of maintenance.

Community Board 5's transportation committee endorsed both plans on Tuesday. The full board will vote on both proposals at its June 8th meeting.

But he clarified his position after Manhattan State Senator Brad Holyman said that he opposed closing Times Square to traffic.

"I hope that one day we can close Broadway from 59th to Union Square," Rodriguez told Gothamist. "I believe at some point we should be aiming to see this area only dedicated to pedestrians, and having a plan of how vehicles should come here only to do deliveries."

For now Rodriguez is focusing on legislation to install more bollards, like the ones that stopped Rojas's Honda, at priority intersections.