Prompted by the cycling death of Marilyn Dershowitz, who was killed last month on West 29th Street in a below-ground corridor by a 7-ton truck, the Department of Transportation is proposing a system of bike lanes in Chelsea that would run east to west on 29th and 30th streets. Members of CB 4 asked the agency for a "safe bike route west of Eighth Avenue," but the DOT specifically wanted to use West 29th and 30th streets, DNAinfo reports. CB 4's transportation co-chair says, "The safety of the bicyclists is our primary concern."

Not so for some of the shopkeeps the Post spoke to. "Another bike lane for me would be a pain in the neck," a clerk at a convenience store on 334 Ninth Avenue says, "It's safe for the bikers, but for businesses, it's bad." A postal worker agreed: "I can't see a lane going that way. There are too many trucks…Where's the bike lane going to go? God bless that woman, but you can't fit a bike lane down there."

Studies have shown that bike lanes make roads safer for pedestrians, cyclists, and motorists, but lets pretend we don't care about safety like some filthy hippie. It's all about cash! But bike lanes are also good for commerce. Studies conducted in San Francisco and Toronto (which doesn't exactly have a cycling-friendly mayor) suggest that consumers on bikes spend more than those in a car. Also, those who eschew their pricey, gas-guzzling burdens tend to have more disposable income, which would pour into the local economy, as this chart from the Intelligent Cities Program illustrates. 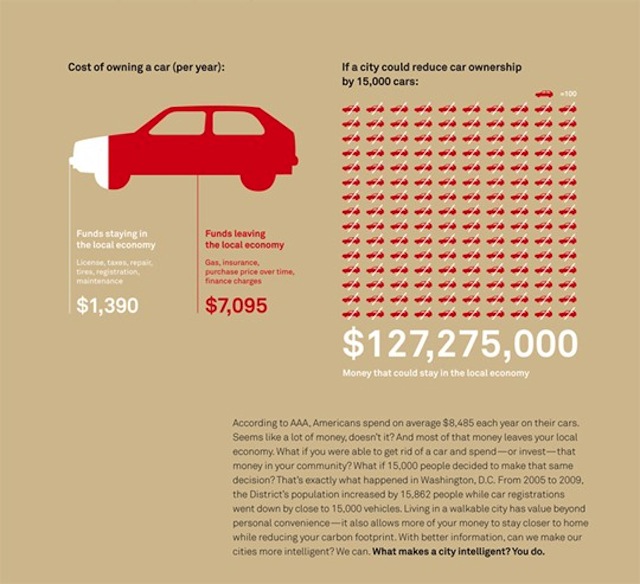 The city has experienced 4 cycling fatalities in a little over a month. But hey, "where's the bike lane going to go?"

#bike lanes
#bikes
#Chelsea
#cycling
#dot
#manhattan
#marilyn dershowitz
#safety
Do you know the scoop? Comment below or Send us a Tip
A new Gothamist is coming! We’ve moved comments over to our beta site. Click here to join the conversation and get a preview of our new website.