Last night while Governor Cuomo cut the ribbon for something called the “Cadillac House” in Manhattan, representatives from the city came to a windowless church basement in Williamsburg to explain why we need to build Mayor de Blasio’s $2.5 billion streetcar along the Brooklyn-Queens waterfront.

The “visioning session” was part of the outreach the city is conducting to generate support for the 16-mile-long Brooklyn Queens Connector and address any questions residents along the route might have.

Wednesday’s session was sparsely attended compared to the previous ones in Astoria and Red Hook. Roughly 20 local residents were outnumbered by representatives from the DOT, the Economic Development Corporation, third parties connected to the project, and reporters.

“The city is growing, we’re at 8.5 million people, the largest New York City has ever been. The subways, the buses—we are bursting at the seams,” DOT Commissioner Polly Trottenberg told the crowd in her remarks, which lasted less than two minutes.

“We need to continue to upgrade and maintain our existing transportation system, but we need to make some new investments, something the city has not done enough of. I think the streetcar for us is an exciting way to do that.”

A recent study commissioned by the city showed that only 13% of potential daily BQX riders would use the route to travel along the waterfront, compared to 16% who have destinations in the two boroughs outside the BQX’s route, and 71% who need to get to Manhattan, ostensibly connecting to the new ferry service the mayor is planning.

The city estimates that the streetcar will boast 15.1 million trips annually by 2035, which is roughly the amount of riders who currently take the bus routes on Fordham Road and Utica Avenue.

Later, Trottenberg was asked why buses weren’t a better and cheaper solution than a streetcar to get people to established transit options.

“We need better bus routes too and it's something that this administration and the DOT are spending a lot of time on,” Trottenberg said.

“It seems like this is a mind-blowing idea to put in a streetcar, but cities all over the world are doing this, rapid fire. This is a big step for us, but when you look at the map of the Brooklyn-Queens waterfront and chart out where the developments are, and the NYCHA properties, and all the things that are happening, I think it's something that's really going to be successful. I think the economics will work.”

After a presentation from the EDC, participants spoke to others sitting at their tables about what they wanted the streetcar to accomplish. 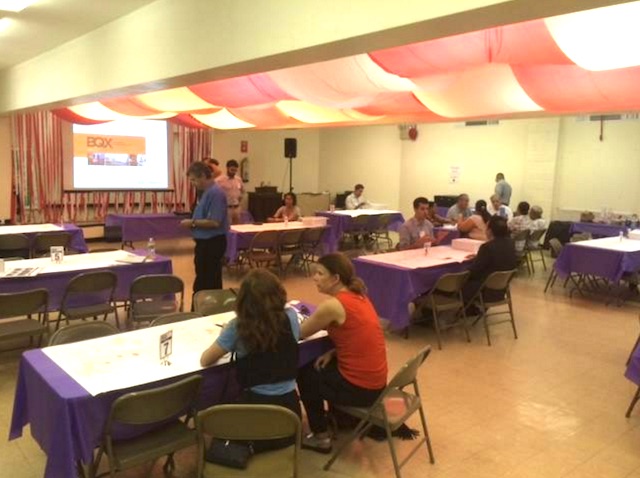 Adrienne Vega, a Williamsburg resident, said that aside from ensuring that seniors had access to the streetcar, her table wanted it to connect to the Bronx.

“You have to take so many trains to get to the Bronx. If we can get the train to extend from the BQX to the Bronx, it’d be the best.”

This sounded similar to the Triborough RX, another idea that has been kicking around for years to connect Brooklyn and Queens with the Bronx using freight lines and LIRR tracks. A 1996 study estimated the RX’s daily ridership at 76,000. The city’s projected daily ridership for the BQX in 2020 is 24,500.

We asked Ya-Ting Liu, the executive director of Friends of the Brooklyn Queens Connector, why the group wanted a streetcar along this route. Why not Friends of the MTA Who Are Going To Use Their Power And Influence To Force Albany & The Federal Government To Properly Fund & Efficiently Run The Agency?

“People that support the streetcar are also supporting a robust MTA system. Those two concepts are not mutually exclusive,” she replied, portraying the BQX as a necessary way for the “city to take control over its own transportation destiny for a change and not be beholden or waiting for federal, state, bureaucracy alphabet soup.”

“I came from the transit advocacy space,” she explained. “It's been sort of a Groundhog's Day scenario—every year or every four years, you have the MTA capital plan, which is unfortunately more hole than plan, and then all the advocates have to rally and ask Albany to prioritize transit funding.”

“The city's going to say, you know what? We're going to solve our own problems, we're going to figure this out ourselves. The mayor has articulated that there's a need for north-south expansion, and they're articulating a vision for adding this new corridor, now they're trying to figure out how to do it.”

The city had little interest in a streetcar until the Friends of the BQX—specifically Two Trees, the DUMBO-based waterfront developer behind the Domino Sugar Factory project—conducted their own study. The city’s study [PDF] is a study of that study, though a more thorough one is in the works.

“This idea doesn't belong to any developer or any one person. This idea has been around for a long time,” Liu said, citing a 2014 piece by the Times’ Michael Kimmelman.

“Part of what makes this model really exciting is that it's 100% financed through this tax increment financing model,” Liu said, referring to the idea that the rising property values from all the development along the waterfront will fund the streetcar. “You don't have that value captured from buses.”

At the end of the night, the tables were asked to sum up their discussions.

Ausar Burke, who lives in Williamsburg, said that his group had “concerns about displacing residents.” They wanted the city to better articulate what the BQX was attempting to do.

“What is the clear goal of the project?” he asked. “Economic development? Or transportation?”

#bqx
#dot
#friends of the bqx
#streetcar
#williamsburg
#original
Do you know the scoop? Comment below or Send us a Tip
A new Gothamist is coming! We’ve moved comments over to our beta site. Click here to join the conversation and get a preview of our new website.