Earlier this week, the Department of Transportation canceled a planned presentation on a hot-button Metropolitan Avenue bike lane proposal 24 hours before it was supposed to take place, saying that planners needed to scrap it and come up with a new design to be considered next year.

The proposed half-mile of bike lanes in an industrial area of East Williamsburg [pdf] would connect Metropolitan and Grand Avenue to a network of bike lanes in Ridgewood and Glendale approved by the community board there and begun by the city last year.

This is what #OpSafeCycle should look like! YAY RIDGEWOOD! RT @RidgewoodBeat Woodward Ave bike lane has been striped: pic.twitter.com/BEX8EeAKB5

The internal friction over the bike lanes motivated area Councilman Antonio Reynoso to urge DOT Commissioner Polly Trottenberg to resist CB1's perceived opposition to Metropolitan Avenue bike stripes, along with that of other community boards who he said care about "parking over safety."

CB1 members and staff told me last week that they had no plans to consider the proposal in the near future, but on Friday they scheduled a presentation on it for this Wednesday, according to Weiser. Then, on Tuesday night, DOT liaison Rhonda Messer emailed the board the following:

We have a late breaking development. Unfortunately we will not have the Metropolitan Ave presentation for you tomorrow night. Apparently a decision was just finalized to go back to the drawing board for this project that connects Brooklyn and Queens. There are ideas in progress for an even better proposal that will potentially offer greater safety benefits. Because approval has been delayed thus far, it is already too late for implementation to happen this season so the hope is that we will be able to implement a new and improved project in 2016.

I will reach out to you as soon as we are ready with a new presentation.

Weiser, the CB1 Transportation co-chair, applauded the move, saying the department and board had taken into consideration concerns about increased traffic raised by business owners along the affected stretch.

"I hail the DOT for doing that, for listening and coming back with a new plan," he said. "They should be given a big shoutout—that's how it should always be. They should listen, and where they can, they should compromise and work it out."

Weiser said he could not name offhand which businesses had objected to the bike lanes because they had reached out several months ago. 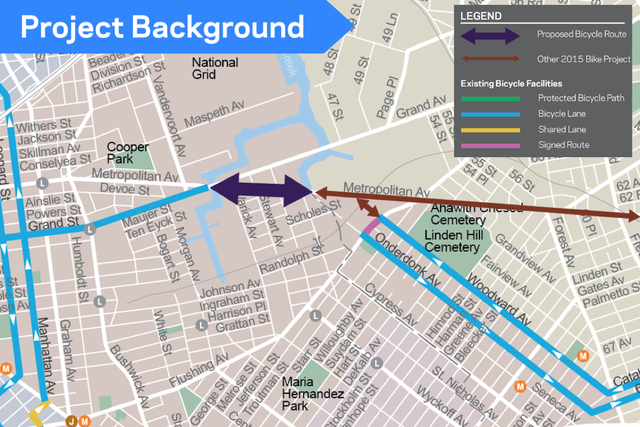 The stretch of bike lane in question. (NYC DOT)

Responding to the postponement, Reynoso struck a conciliatory tone, saying he had spoken to the DOT and been told that the delay was to expand the geographic scope of the Metropolitan redesign.

"I think that's an honest thing on all fronts," he said. "[Transportation officials] want to increase safety measures and do it with as much community support as possible."

"I don't think they're delaying it because the community board is against it," he added. "We'll see: if the scope is larger, then they really are trying to do better."

A DOT spokeswoman confirmed that it is reviewing the plan, and said the Queens portion is also being reconsidered.

The stretch of Metropolitan where a bike lane is proposed, between Newtown Creek and Onderdonk Avenue, was the scene of 14 crashes that injured six people in 2014, two pedestrians and four drivers, according to city crash data. Total Slacker drummer Terence Connor was killed by a hit-and-run driver there in 2012. Reynoso, a cyclist himself, said he avoids the street because it is too dangerous to bike down the way it is currently laid out.

Caroline Samponaro, deputy director of the street-safety group Transportation Alternatives, said that whatever the reason, "to delay it for another season is entirely unfair to residents." The city could always, she explained, expand the bike-route network at a later date if planners so choose. The important thing, she said, is getting paint on pavement.

"Safety projects are not a popularity contest; they're not up for a vote," she said. "The reason we're going to build the bike lane is pretty clear: it's to prevent injuries that are happening on the corridor, which should be sufficient as far as a rationale in the Vision Zero era."

#bike lanes
#community board 1
#cyclists
#dot
#east williamsburg
#parking
#traffic
#vision zero
#williamsburg
#original
Do you know the scoop? Comment below or Send us a Tip