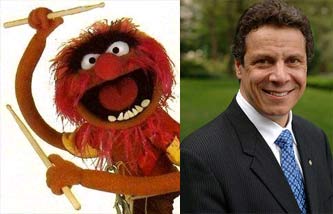 Troopergate is the story that just keeps giving! Yesterday, we found out that Darren Dopp, former aide for Governor Spitzer accused of leaking information to smear Senate Majority Leader Joseph Bruno, probably won't face perjury but there's question as to whether a sworn statement he gave is actually a sworn statement since it doesn't have the language "I swear to the truth of this statement." Now it turns out that Dopp called Attorney General Andrew Cuomo "an animal"!

Sources told the Daily News that Dopp felt Cuomo was gunning for him while investigating Troopergate (which got it name because State police were allegedly tracking Bruno's trips). According to Dopp, Spitzer's lawyer Peter Pope "insisted" Cuomo wanted to charge him with "misconduct." Which could suggest why Dopp was convinced to make the sworn-not sworn statement. At any rate, dealing with animals shouldn't have been surprising to someone working under a Steamroller.

In other Spitzer news, the Governor is shaking up his staff in a number of positions. The Sun says one move is to "restrict" his inner circle to his wife, adviser Lloyd Constantine and one or two others.